Below is an amazing illustration of shifts in the sizes of leading global economies:

For more on China see here, here, here, and here. This reminded me of this graphic from Carlos Lopes, former head of the UNECA: 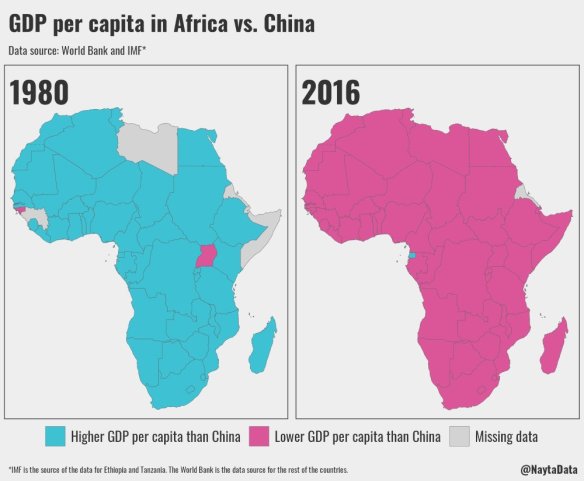 All that happened in just 36 years. Time is on Africa’s side. If (and that’s a big IFF) African elites can get their act together. As shown in the graph below, the lost long decade (1980-1995) was particularly brutal for African economies — but it was a temporal dip and not a permanent feature of African economies. 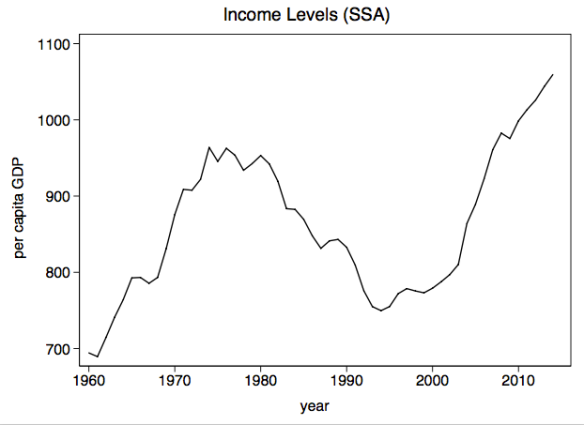 It is also worth noting that in 1980 African states and China were not at the same level of institutional development. By that time China had already accumulated centuries of coherent stateness — which made it possible for elites to optimally allocate human and capital resources in ways that produced the growth miracle.

Here is a good nuanced take on trends in economic growth and development on the Continent.

The simple answer is NO. The long answer is below.

Blattman’s latest post decries Bill Gates’ (and much of the development community’s) focus on data gathering, and may I add, strengthening of statistics departments. He writes:

I would like to see better GDP numbers–who wouldn’t?–but it’s hard for me to see the constraint on development this revelation would relieve, and why it’s anywhere close to the top ten constraints poor countries face.

The problem with those of us in the development complex, be we academics or Presidents or foundations or NGOs, is we want the world nicely ordered with levers to pull and a dashboard to monitor. And so we put a lot of energies into levers and dashboards and monitors.

I think of poverty and political powerlessness in terms of constraints and frictions–the limitless host of things, little and big, that made it more difficult to run a business profitably or turn a profit or invent a new product or get your kid educated or select the leader who serves your interests. States and institutions and norms and technology and organizations reduce these frictions and relieve these constraints. That is the fundamental driver of development. This is the basic logic behind almost every theory of development in your textbooks, from growth models to poverty traps to everything in between.

Blattman is right that improving the capacity of statistics departments will not do much to alleviate poverty now (although as I write this in the basement of a government library in Nairobi I can’t stop thinking that stats departments need to do more). At the same time however, I would be wary of an outright dismissal of the need for better data gathering by governments, for two reasons.

Firstly, at the core of state capacity is the ability to make legible (depite Scott’s observations) the terrain over which the state claims to have dominion. Strong states are those that know your home address, the number of children you have and how much money you made last year. When governments have the capacity to get better GDP data, they will also know how many kids died or were not immunized last year, etc etc. And perhaps more importantly, they will be able to know how much you made last year and how they can get a bigger share of it. As Besley and Persson have argued, there is a strong case to be made for the centrality of public finance to development. Poor countries have small tax bases yes, but tax evasion in these countries still denies national treasuries lots of cash. And it is not just a question political will. Low capacity plays a role. Imagine trying to implement an income tax in a country of about 20 million adults but where under 4 million are in formal employment and can have their taxes withheld.

Secondly, Blattman seems to be making an argument for the private sector as a key part of greasing frictions that stifle development (which is true). But the private sector initiatives he cites can only flourish when there is strong state monitoring (with reliable data) in the background. Credit bureaus need a strong and enforceable regulatory framework. Otherwise no one will believe their credit reports. Freedom of (government) information laws are cool, but such information must first exist, and in reliable format. In other words stats departments must do their job well.

Lastly, good data also make for more informed politics. Kenya, for instance, could do with more disaggregated GDP data – by counties or lower – as it attempts to implement a devolved system of government and revenue allocation.

All this to say that when states have a handle on how much is produced, they will know how and where to get their share. And the more they demand a bigger share, the more the people will demand some of it to be returned as public goods (and these can also include reliable information that would be accessed via freedom of information laws). Yes, GDP data was invented post-WWII when some countries were already winning against poverty for decades. But even before that the more successful states were the ones that were better at information gathering. Flying blind is simply not an option for states.

Over at African Arguments Bright Simons tries to debunk the accepted paradox of African poverty in the middle of a natural resource glut. The post is definitely worth reading, and raises some salient questions regarding resource use and development policy in Africa – and by extension, the economic viability of some African states (thinking of Chad, Central African Republic and Niger….)

Of those few minerals that Africa is believed to hold globally significant or dominant reserves, nearly all of them are concentrated in 4 countries: South Africa, Angola, Democratic Republic of Congo and Guinea. When one computes the level of inequality of mineral distribution across different continental regions, Africa pulls up strongly, showing a far higher than average level of distribution ‘imbalance’ per capita or square mile. In very simple terms, it means that mineral wealth is more concentrated in a few countries in Africa compared to other continents.

with the exception of bauxite and petroleum, these minerals are not as widely used in industry (or in the same considerable volumes) as a number other minerals, such as tin, copper, nickel, zinc, iron, coal, and lead, that Africa does not produce in sufficient quantities. Indeed, of the top 5 metallic minerals which constitute 62 percent of the total value of global production, Africa is only a significant producer of one of them: gold. Africa has 8 percent of the world’s copper, 4 percent of aluminium, 3 percent of its iron ore, 2 percent of lead, less than 1 percent of zinc, and virtually no tin or nickel. To put these figures into perspective, recall that Africa has about 14.5 percent of the world’s population.

….. Africa’s low production of the ‘hard minerals’ minerals most intensely used in industry compared to the less widely used ‘soft minerals’ reduces its total take from the global mineral trade. But it also makes a nonsense of fashionable policy prescriptions that emphasise import-substitution strategies based on value addition to minerals, rather than export competitiveness through smart trade strategy and the deepening of the financial system to support entrepreneurs.

William Easterly has this neat collection of pics to show just how badly Africa is doing in many sectors compared to the rest of the world. The Continent’s share of global trade is a paltry 2%. In the 1960’s Africa’s share of world exports was 3%. By the 1990s the same had declined to 1%. The decline in exports did not translate into more intra-continental trade – which still stands at a dismal 10%. This despite the proliferation of regional trade agreements on the Continent (ECOWAS, SADC, EAC, COMESA, ECCAS, SACU…..). It would be interesting to analyse just how effective these regional trade pacts have been over the decades. Me thinks that like the OAU and latterly the AU they have merely been big men’s clubs with no real impact on trade and development. But I could be wrong.

An illustration of Africa’s ever shrinking share of world trade since the 1950s can be found here.