This is from Charles Onyango-Obbo in The EastAfrican:

In the year 2000, Ugandan exports to Rwanda were worth $9 million. By the 2017/2018 financial year, this figure had shot up to $197 million, against imports of $20 million, giving it a surplus of $177 million, despite the icy relations currently prevailing.

In the same period, in a reversal of fortune, Uganda for the first time registered a $122 million trade surplus with Kenya, with exports worth $628 million and imports worth $505 million.Though Uganda hardly invests any serious money in agriculture, the country is now the EAC’s bread basket.

Kenyan business people travel as far as the remote parts of western Uganda to villages whose names they can’t pronounce, and put a deposit on food crops before they are harvested. None of this happens as a result of state policy, but rather the invisible hand of integration. The magic happens in that “invisible” East Africa.

Despite the circular firing squad that is the relationship between East Africa’s heads of state, the economic incentives for ever greater integration in the EAC remain strong.

Kenyans pride themselves in their ability to consume machozi ya simba (lion’s tears) and have a good time, more so than their regional neighbors, especially the polite Tanzanians to the south. But the data, at least between 2003-05, says something different. Kenyans drink the least in the EAC (which is a testament to the strong conservative undercurrents in Kenyan society despite the outward liberalism that we (almost exclusively Nairobians) all like to wear on our sleeves). 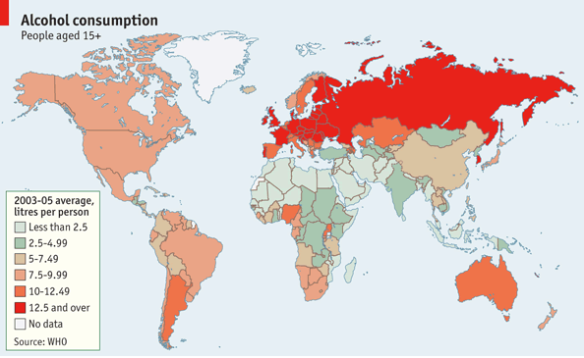 Source: The Economist
It is also in Kenya that there is an anti-drinking law forbidding the sale of alcohol before 5 PM on weekdays and 2 PM on weekends and after 11 PM. Of course the law is almost never enforced and seems to only benefit the police whenever they need extra cash from bar operators. That said, sections of Kenyan society have a serious drinking problem that the government continues to ignore at enormous social and economic cost. Incidentally, like all good Commanders in Chief, ours is no stranger to booze, although he must’ve ditched the habit now that he is lives in the House on the Hill.

The ICG has a good report on the simmering conflicts in Sudan and South Sudan:

The loss of South Sudan has had a profound effect on the NCP, and senior generals led a soft-coup within the party. They have outflanked more pragmatic elements in the NCP who seek a negotiated strategy. Encouraging progress in the post-separation arrangements between North and South was blocked. More importantly, hardliners in Khartoum — including SAF generals — immediately rejected a 28 June framework agreement, which includes a political and a security agreement for Southern Kordofan and Blue Nile, facilitated by former South African President Thabo Mbeki and Prime Minister Meles Zenawi of Ethiopia, and signed by Dr. Nafie Ali Nafie, Co-deputy NCP chairman and a presidential adviser. A few days later, President Omar al-Bashir publicly disavowed the agreement.

Check out the rest of the report here.

For the most part I agree with Laura. And like her, I am on record as having concerns over the alarmist celebrity diplomacy/mediation effort that has been orchestrated in South Sudan, Darfur and eastern DRC by Prendergast and his buddy Clooney.

War is nasty and should be the last option. That said, there is a need for genuine debate over how to achieve the twin goals of state monopoly of violence within South Sudan and the deterrence of a trigger-happy Khartoum.

If it were left to me I would quickly move to decouple the SPLM and SPLA as a condition for any military assistance. The last thing the region needs is yet another regime with a fused political and military leadership as is the case in Rwanda and Uganda.

William Easterly has this neat collection of pics to show just how badly Africa is doing in many sectors compared to the rest of the world. The Continent’s share of global trade is a paltry 2%. In the 1960’s Africa’s share of world exports was 3%. By the 1990s the same had declined to 1%. The decline in exports did not translate into more intra-continental trade – which still stands at a dismal 10%. This despite the proliferation of regional trade agreements on the Continent (ECOWAS, SADC, EAC, COMESA, ECCAS, SACU…..). It would be interesting to analyse just how effective these regional trade pacts have been over the decades. Me thinks that like the OAU and latterly the AU they have merely been big men’s clubs with no real impact on trade and development. But I could be wrong.

An illustration of Africa’s ever shrinking share of world trade since the 1950s can be found here.