You probably saw this graph in your undergraduate development class — almost invariably as a demonstration of South Korea’s massive growth relative to countries that were allegedly at similar levels of “development” in the early 1960s. 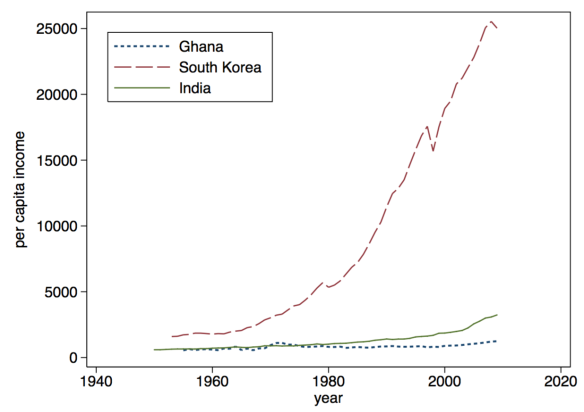 But were these countries really at the same level of development as South Korea?

The simple answer is no.

And to know why you need to read States and Markets: The Advantage of an Early Start:

A longer history of statehood might prove favorable to economic development under the circumstances of recent decades for several reasons. There may be learning by doing in the ways of public administration, in which case long-standing states, with larger pools of experienced personnel, may do what they do better than newly formed states. The operation of a state may support the development of attitudes consistent with bureaucratic discipline and hierarchical control, making for greater state (and perhaps more broadly, organizational) effectiveness. An experienced state like China seems to have been capable of fostering basic industrialization and the upgrading of its human capital stock even under institutions of government planning and state property in the 1960s and 1970s, whereas an inexperienced state like Mozambique sowed economic disaster when attempting to pursue similar policies a few years later. Such differences may carry over to a market setting — contrast, for instance, the late 20th century economic development of Japan and South Korea, modern countries with ancient national histories, with that of the Philippines, a nation that lacked a state before its 16th century colonization by Spain.

Development is not just about income. It also involves a lot of intangible socio-political variables. Going back to the graph, a key difference in 1960 between Ghana, India, and South Korea was the degree of coherent stateness. On this measure South Korea was way ahead of its developing country peers.

For more on this Dani Rodrik has a delightfully concise take on how South Korea and Taiwan grew rich.

Even within Africa, historical stateness makes a difference in development outcomes. A neat recent example can be found in Ethiopia’s ability to build a light rail in Addis in record time as Nigeria floundered.