This is from a paper that is forthcoming in the Journal of Political Economy:

Can a government in an ethnically divided, conflict-ridden society help bridge the ethnic divide?

…. This paper examines the role of propaganda as a tool of nation-building in Rwanda – a country in which Hutu extremists massacred more than 70% of the minority Tutsi population in 1994 in one of the worst genocides in recorded history. Critics of the government’s program of post-genocide nation-building (e.g. Thomson (2011a)), have noted how difficult it is to assess whether progress in ethnic reconciliation is cosmetic or real. In large part, this is because, under President Kagame, Rwanda is a quasi-autocracy that controls the media and tries to manage the narrative on reconciliation. In fact, according to a recent report on Rwanda in the New York Times: “Mr. Kagame has created a nation that is orderly but repressive…Against this backdrop, it is difficult to gauge sentiment about the effectiveness of reconciliation efforts.”

We exploit variation in exposure to the government’s radio propaganda due to the mountainous topography of Rwanda. Results of lab-in-the-field experiments show that individuals exposed to government propaganda have lower salience of ethnicity, increased inter-ethnic trust and show more willingness to interact face-to-face with members of another ethnic group. Our results suggest that the observed improvement in inter-ethnic behavior is not cosmetic, and reflects a deeper change in inter- ethnic attitudes. The findings provide some of the first quantitative evidence that the salience of ethnic identity can be manipulated by governments.

Taken together the evidence suggests that exposure to government radio leads to higher inter-ethnic trust and cooperation as well as lower ethnic salience.

Recall that the use of broadcast media — especially by Radio Television Libre des Mille Collines — was critical for mobilization that resulted in the Rwandan genocide.

The questions raised by the paper are a reminder that is in the long run, ethnic heterogeneity is endogenous to stateness and state capacity.

See, for example, the famous case of France.

Finally, Rwanda is still a personalist autocracy that is allergic to political freedoms and is a serial abuser of human rights. Whatever economic or socio-political developments Paul Kagame achieves while in office are at risk of unraveling as long as the entire political system remains organized around one mortal man.

This is from an interesting interview with the FT:

During the interview, Mr Kagame says it matters little whether there are real physical differences between Hutus and Tutsis or whether these were arbitrary distinctions codified by race-obsessed imperialists. “We are trying to reconcile our society and talk people out of this nonsense of division,” he says. “Some are short, others are tall, others are thin, others are stocky. But we are all human beings. Can we not live together and happily within one border?” Mr Kagame has taken a DNA test that, he says, reveals him to be of particularly complex genetic mix. The implication, he says, is that he, the ultimate symbol of Tutsi authority, has some Hutu in his genetic make-up.

The transcript is available here. Read the whole thing. 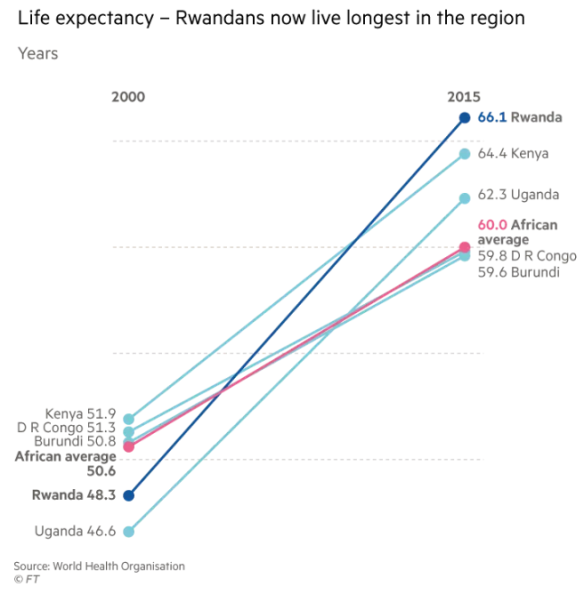 Ultimately, the sustainability of Kagame’s achievements will depend on his ability to solve an important optimal stopping problem:

The problem, he says of who might succeed him, is preventing someone from “bringing down what we have built”. Above all, he says, he wants to “avoid leaving behind a mess”.

The president insists it was never his intention to stay on, but the party and population insisted. “We are not saying, ‘We want you forever until you drop dead,’” he says, imitating the voice of the people. “We’re only saying, ‘Give us more time.’”

Rohac and co-authors provide answers (from Rwanda) to six questions you always wanted to ask about Africa. The questions and answers revolve around issues of rule of law, police-making, institutions, development assistance, human capital and culture.

Check out the publication here.

Many, including yours truly, have a love-hate relationship with Paul Kagame and his RPF regime in Rwanda.

On the one hand, his adventures in eastern DRC; alleged involvements in the assassination of opposition figures both at home and abroad; and overall restriction of political space in Rwanda are cause for concern. But on the other hand, he seems to be doing a marvelous job on the economic front (see here and here, for instance).

In the latest issue of African Affairs, Booth and Golooba-Mutebi explore the nature of state-led development in Rwanda, with particular attention to how state-run companies are “ice breakers” for private sector firms in different sectors of the economy. The paper also observes Kagame’s strict separation of state and private accumulation of wealth, a fact that is demonstrated by Rwanda’s comparatively good performance on corruption indices. It is definitely worth reading.

Here is part of the abstract:

This article addresses one thematic gap – the distinctive approach of the RPF-led regime to political involvement in the private sector of the economy. It does so using the framework of a cross-national study which aims to distinguish between more and less developmental forms of neo- patrimonial politics. The article analyses the RPF’s private business operations centred on the holding company known successively as Tri- Star Investments and Crystal Ventures Ltd. These operations are shown to involve the kind of centralized generation and management of economic rents that has distinguished the more developmental regimes of Asia and Africa. The operations of the military investment company Horizon and of the public–private consortium Rwanda Investment Group may be seen in a similar light. With some qualifications, we conclude that Rwanda should be seen as a developmental patrimonial state.

I often tell my friends that at the end of the day, really, all that matters is that we bring down infant mortality to under 10/1000 live births [this is a good proxy for quality of life] and improve the standards of living for the average person, everywhere.

With that in mind, the favored retort among anti-democracy crowds in Sub-Saharan Africa – that “you can’t eat democracy” – has some truth in it. I bet most people would rather live in authoritarian Singapore than democratic Malawi (feel free to disagree).

The point here is that good governance (and for that matter, democracy) are means to an end, and we should never forget what the end is – that is, the improvement of the human condition for all. And yes, I agree that democracy, i.e. political freedom, could also be an end in itself, with the qualifier that those most likely to enjoy freedom are those that are already fed, clothed and housed, with a little more time to spare to blog and read Chinua Achebe, Ngugi wa Thiong’o or Okot P’Bitek.

China and Vietnam in Asia, and now Rwanda and Ethiopia in Africa, are cases that will continue to invigorate the debate over how to improve living standards for the largest number of people in the least amount of time.

For now my love-hate relationship with Paul Kagame and Meles Zenawi [of Ethiopia] continues….

Rwandans go to the polls on August 9th. There are no prizes for guessing who the winner will be. President Paul Kagame, who is credited by most to have ended the Rwandan genocide in 1994, has recently had to resort to his darker tendencies to continue his stay in power, even as he walks the tight rope of political liberalization. Given the instability that the whole process has created in the country (grenade attacks in Kigali, murder of opposition leaders, attempted assassinations in foreign lands, ever rising ethnic tension etc etc) one wonders whether Mr. Kagame should stop trying to have his cake and eat it.

Political liberalization means being willing to give up power. But it is obvious that Mr. Kagame is not ready for this. Instead he wants it both ways – by holding sham elections to keep the liberal international community happy and singing his praises while he continues to muzzle the Rwandan domestic democratization movement. He may yet succeed at this, or in the more likely scenario go the way of the proverbial man who tried to ride two donkeys at the same time.

As Bratton and van de Walle have pointed out, “Liberalized authoritarianism…. is an unstable form of regime. Its political openings are easily and summarily shut as strongmen place ever heavier reliance on a shrinking circle of military loyalists. In the worst-case scenarios, blocked or precluded transitions lead to an intensification of political conflict, to anarchy (a regime without rules of any kind) and to the implosion of the authority of the state.”

President Kagame came to power in 1994 after leading the rebel Rwandan Patriotic Front in the conquest of Kigali. Since then he has had a largely positive role in an attempt to heal Rwandan wounds and spur economic development. But 15 years is a long time and it is increasingly becoming clear that Mr. Kagame has overstayed his welcome in State House, Kigali. Like Uganda’s Museveni, Ethiopia’s  Zenawi, and other Continental autocrats, he seems convinced that he is an irreplaceable God’s gift to Rwanda. Someone needs to disabuse him of this belief.