Many, including yours truly, have a love-hate relationship with Paul Kagame and his RPF regime in Rwanda.

On the one hand, his adventures in eastern DRC; alleged involvements in the assassination of opposition figures both at home and abroad; and overall restriction of political space in Rwanda are cause for concern. But on the other hand, he seems to be doing a marvelous job on the economic front (see here and here, for instance). 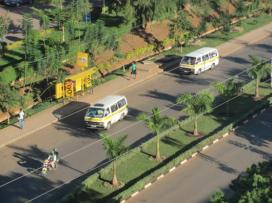 In the latest issue of African Affairs, Booth and Golooba-Mutebi explore the nature of state-led development in Rwanda, with particular attention to how state-run companies are “ice breakers” for private sector firms in different sectors of the economy. The paper also observes Kagame’s strict separation of state and private accumulation of wealth, a fact that is demonstrated by Rwanda’s comparatively good performance on corruption indices. It is definitely worth reading.

Here is part of the abstract:

This article addresses one thematic gap – the distinctive approach of the RPF-led regime to political involvement in the private sector of the economy. It does so using the framework of a cross-national study which aims to distinguish between more and less developmental forms of neo- patrimonial politics. The article analyses the RPF’s private business operations centred on the holding company known successively as Tri- Star Investments and Crystal Ventures Ltd. These operations are shown to involve the kind of centralized generation and management of economic rents that has distinguished the more developmental regimes of Asia and Africa. The operations of the military investment company Horizon and of the public–private consortium Rwanda Investment Group may be seen in a similar light. With some qualifications, we conclude that Rwanda should be seen as a developmental patrimonial state.

I often tell my friends that at the end of the day, really, all that matters is that we bring down infant mortality to under 10/1000 live births [this is a good proxy for quality of life] and improve the standards of living for the average person, everywhere.

With that in mind, the favored retort among anti-democracy crowds in Sub-Saharan Africa – that “you can’t eat democracy” – has some truth in it. I bet most people would rather live in authoritarian Singapore than democratic Malawi (feel free to disagree).

The point here is that good governance (and for that matter, democracy) are means to an end, and we should never forget what the end is – that is, the improvement of the human condition for all. And yes, I agree that democracy, i.e. political freedom, could also be an end in itself, with the qualifier that those most likely to enjoy freedom are those that are already fed, clothed and housed, with a little more time to spare to blog and read Chinua Achebe, Ngugi wa Thiong’o or Okot P’Bitek.

China and Vietnam in Asia, and now Rwanda and Ethiopia in Africa, are cases that will continue to invigorate the debate over how to improve living standards for the largest number of people in the least amount of time.

For now my love-hate relationship with Paul Kagame and Meles Zenawi [of Ethiopia] continues….