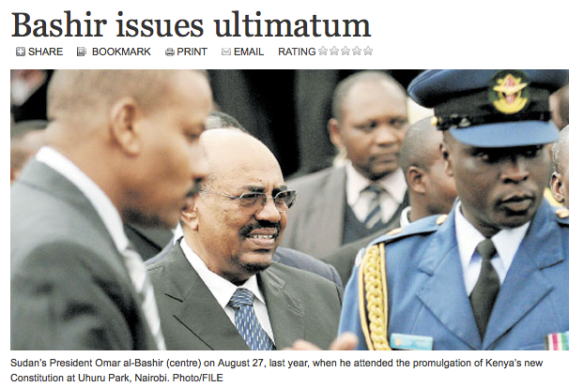 A few days ago a Kenyan judge ordered the government to arrest Sudanese President Omar al-Bashir if he ever sets foot in Kenya. Mr. Bashir has an outstanding arrest warrant against him from the ICC for crimes against humanity committed since 2003 in Darfur.

The ruling has since metastasized into a full blown diplomatic row; Khartoum expelled the Kenyan ambassador before rescinding the expulsion, and is now threatening to cut all trade ties with Kenya, expel Kenyans living in Sudan and deny any planes leaving or going to Kenya from flying in its airspace – if the government does not take back the ruling in two weeks.

The diplomatic row aside, the case has implications for the reform process in Kenya. The case is a test of the depth of the Kenyan judiciary’s new found independence from the executive.

“al-Bashir expects Nairobi to scrap the arrest warrant within the next two weeks and not simply file an appeal.”

That is not how the judicial process works in a democracy. The executive cannot just scrap a judicial ruling. Within Kenya, for the sake of precedence the government must be seen to be complying with court rulings. The Chief Justice has already warned the executive against ignoring the court ruling saying that

“If a country chooses to live by anarchy, it must be ready to face the consequences of disregarding the law.”

It remains unclear what the executive will do given Khartoum’s two week ultimatum. Disregarding the court ruling will come with consequences for the individuals involved – in particular the Foreign Minister and the Commissioner of Police.

Judicial reform in Kenya made another big leap with the appointment of five individuals to the Supreme Court, the highest court in the land. Njoki Ndungu, Jackton Ojwang, Smokin Wanjala, Mohammed Ibrahim and Phillip Tunoi will join the Chief Justice, William Mutunga, and his assistant Nancy Baraza [Ms Baraza has since been replaced with Justice Kalpana Rawal] on the court.

Mutunga and Baraza will champion liberal views on the court – the Church and other conservative elements in Kenyan society unsuccessfully fought against their nomination to lead the Supreme Court. Messrs Tunoi and Ojuang will represent conservative views. Ndungu, Wanjala and Ibrahim are believed to be centrists.

The Supreme Court will provide the final word on constitutional matters as well as petitions involving presidential elections.

Although one can’t dismiss the possibility of political jockeying behind the scenes, the nomination of all seven justices was a coup for Kenya’s civil society. The Judicial Service Commission sought a clean break with Kenya’s muddy judicial history. None of the high-flying judges from the Moi and Kibaki eras got a nod to join the court.

Because this is Kenya, the JSC also made sure that the seven nominees reflected ethnic and regional balance. The ethnic balance in the nominations will ensure that parliament approves them.

Overall the court appears to have a progressive make up, albeit with a rightward tilt. This is good for Kenya.

In related news, the Kenyan parliament also approved the nomination of Keriako Tobiko to be the director of public prosecutions. Mr. Tobiko’s nomination was not without controversy, with civil society groups and a section of MPs accusing him of corruption and incompetence. In the end his nomination passed through.

The next big battle over judicial reforms will be over the appointment of the Attorney General.