This post first appeared on the African Development Bank’s Integrating Africa Blog where I am a regular contributor.

UPDATE: I got an email from readers working with the Regional Initiative in Science and Education (RISE), exactly the kind of collaboration that I am saying is much needed in Africa. Check them out here.

According to The Times Higher Education World University Rankings 2012-2013, the highest ranked university in Africa, the University of Cape Town, is 113th in the world. The ranking system employs 13 performance indicators that take into account universities’ core functions, including “research, knowledge transfer and international outlook.” Among the leading 400 world academic institutions, there are only four from Africa, all in South Africa. As a region, Africa only has 35 scientists and engineers per million inhabitants, compared with 168 in Brazil, 2,457 in Europe and 4,103 in the United States. The region is clearly behind as far as knowledge production and dissemination is concerned, producing only 1.1 percent of the world’s scientific knowledge, despite comprising more than 13 percent of the global population.

At barely over 8 percent, Africa’s gross enrollment in tertiary institutions of learning is the lowest of any region in the world (UNESCO, 2011). The average enrollment rate for developing countries is 23 percent, and that for advanced countries is 74 percent. Africa’s poor showing in the higher education sweepstakes is both a cause and effect of the region’s poor economic environment. The massive cuts in higher education funding in the wake of the structural adjustment programs of the 1980s and 1990s, even as enrollment more than tripled between 1991 and 2005, have had an adverse impact on quality. And in turn, the lack of high quality tertiary level education has starved the region of high skills needed for efficient allocation of factors of production thereby stunting improvement in productivity, high value addition and research and development. Africa devotes less than 1 percent of its GDP to research and development.

Data from 33 countries for which it is available show that tertiary education financing in the region has declined from a high of US $6,800 per student per year in 1980 to just about $981 in 2005. Over the same period the World Bank decreased its education lending from 17 percent in 1985-89 to just 7.5 percent currently (this is despite the fact that the World Bank nearly doubled its education lending between 2008 and 2009). The decline in public funding in the face of increasing demand for higher education has led to the proliferation of private universities of dubious standards and a bias towards perceived “soft” fields. In 2004 a meager 28 percent of students were enrolled in perceived “hard” disciplines in the sciences and engineering.

A 2008 study of 12 countries showed an increase in public universities from 113 to 188 between 1995 and 2008. Over the same period private universities ballooned from 14 to 107. This rapid increase in the number of universities in the region has not been matched by an increase in the number of trained teaching staff or facilities such as laboratories, libraries, and the like. Indeed, most of the new universities have tended to specialize in vocational subjects that require very little capital and human resource investment. To put it mildly, there is a great mismatch between the region’s development needs and the type of graduates it produces each year. 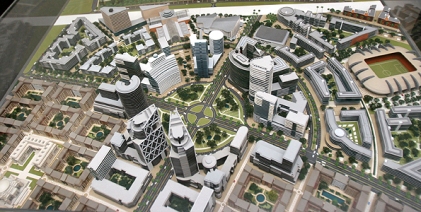 An impression of the proposed Konza City in Kenya

The shortage of skills permeates nearly all skill levels, and could get worse as the region’s economy continues to grow over the next two decades. The case of Kenya is illustrative. The country has an ambitious plan to be the information and communication technology (ICT) hub of Eastern Africa (dubbed the “Silicon Savannah”) complete with a proposed $10 billion techno-city (Konza City) situated about 60 kilometres southeast of Nairobi. Already ICT multinationals, including IBM, Microsoft, Google and Intel, have their regional headquarters in Kenya. All this sounds good, except the lack of local skills. IBM’s research lab in Kenya has had to source for top talent among graduates in computer science, electrical engineering, mathematics, and data scientists from American universities. There is still a shortage of required skills among graduates of Kenyan universities. Quality assurance is also lacking, as recent news reports of “theses for hire” have demonstrated.

As the Kenyan case suggests, the lack of sufficient investment in high quality tertiary education has adversely impacted Africa’s ability to realize its economic potential. A 2005 study showed that a one-year increase in the higher education stock of the region could boost growth rate by about 0.63 percentage points. This adds up to an overall increase in income by about 12 percent over five years. For the region to take off economically there is need for greater investment in quality higher education that will train workers for the 21st century economy. But improving the quality of higher education in the region will be a very costly affair. On their own, the region’s countries lack both the resources (on account of their small economies) and demand (on account of their population sizes) to justify the types of investments required. This is where regional cooperation comes in.

Cross-border educational exchanges are not new in Africa, and go back to the pre-independence era. For generations non-Senegalese francophone students have studied in Senegal, seen as a cheap way of getting quality education at par with diplomas from France. Uganda, with East Africa’s top university, Makerere, hosts legions of Kenyan students, eager to avoid congestion and high costs back home. South Africa, with its many quality institutions is also a preferred destination for students from across the continent. These historical cross-border exchanges have led to the formation of regional associations of higher education – the francophone Conseil Africain et Malgache pour l’Enseignement Superieur (CAMES); Inter-University Council of East Africa (IUCEA); Southern African Regional Universities Association (SARUA); and inter-university cooperation under the Arab Maghreb Union (AMU). Continent-wide, the 208-member Association of African Universities (representing 45 countries) is the umbrella organization of the region’s institutions of higher learning.

These associations need to be strengthened and empowered as drivers of regional harmonization of higher education both to facilitate cross-border inter-university mobility of both teachers and students and guarantee quality assurance. As a 2007 World Bank report aptly noted, “regional quality assurance networks are particularly relevant to Africa because of human resource constraints.” On this score the European Higher Education Area provides a possible model. The just over 10 years old Bologna process is working towards ensuring inter-university mobility (in terms of courses, qualifications, and periods of study) as well as a uniform quality assurance standard. In the African context, a continent-wide area of higher education is infeasible because of language and logistical constraints. However, sub-regional areas of higher education, based on the existing associations, provide a possible avenue to invest in a few good institutions of higher learning that can have a demonstrative effect on national institutions as well set high standards of learning. The associations themselves can also serve as certification bodies to ensure a uniform quality assurance standard (see here).

The announcement in late July 2013 of the creation of a new US $154.2 million multinational science, innovation and technology Pan African University (PAU) in the next five years is therefore welcome. (The African Development Bank (AfDB) has pledged a $45 million grant towards the effort.) PAU will be structured around existing institutions of higher learning across Africa’s five sub-regions. Basic sciences, technology and innovation will be based in East Africa; earth and life sciences including health and agriculture in West Africa; governance, humanities and social sciences in Central Africa; water and energy sciences including climate change in North Africa; and space sciences in Southern Africa.

Thus far, discussions over regional integration of systems of higher education have tended to view tertiary institutions as tools for regional economic and political integration – be it in East Africa, Europe or East Asia. However, the creation of stronger regional areas of higher education – especially in a region like Africa – can also be an economically efficient way of facilitating greater investment in higher education to match the demands of a 21st century economy. It is encouraging that current trends signal a move in this direction. University systems in Africa’s sub-regions would be a good place to start.

I conclude with a caution. The rapid increase in the number of public and private universities in Africa over the last two decades has come at the expense of other post-secondary institutions of learning such as polytechnics (this shift has occurred to a lesser extent in francophone Africa than anglophone Africa). In many countries governments have simply converted polytechnics and other constituent colleges into fully-fledged universities. This trend is worrying, especially given the fact that the vast majority of high school leavers on the continent do not make it to university. The low quality of high school education in the region (as demonstrated by the recent mass student failures in Liberia and Tanzania) is yet another reason why these “bridge” tertiary institutions are needed, both to prepare students for university and to impart valuable skills for those that do not eventually make it to university.

The rush to invest in university education should not distract from the fact that vocational post-secondary institutions, such as polytechnics, are an important component of human capital development, even in advanced countries as is the case in Germany (with its impressive “dual system” of training codified in the Vocational Training Act of 1969). As African economies move from dependence on primary commodities to manufacturing and technology, there will be need for skilled workers at all occupational levels. Doing away with vocational post-secondary institutions will only serve to further inhibit the development of adequate and relevant human capital to match the increased demand for skilled workers.