1. As usual, great career advice for those in the academy from Chris Blattman.

2. Boring Development asks some interesting questions re RCTs, and questions the internal validity assumption many of them trumpet. Which raises the question, if RCTs are cannot guarantee internal validity can results so obtained be useful for policy development? My general response here is that not all RCTs are useful for policy development. The obvious incentives to publish clearly skew the design and implementation of studies in a way that makes only a fraction of them useful for policymakers (the IRB process notwithstanding). But all things considered, randomistas have probably made the world a better place.

3. An unfolding case in Guinea could drastically change what is permissible in the process of acquiring concessions from dubious governments. Benny Steinmetz of BSGR bought the Simandou concession in late 2008 during the last days of the administration of ailing dictator Lansana Conte (allegedly with the help of Mr. Conte’s fourth wife). According to FT, BSGR spent a mere $160m for the rights to mine in Simandou. Less than two years later, the company sold 51% of its rights to the Brazilian mining giant Vale for $2.5 billion, $500m of which was in cash. Last week a government committee investigating the Conte-BSGR deal found evidence of corruption and recommended that BSGR and Vale be stripped of their rights to Simandou. If the ruling sticks, lots of contracts in several resource rich states in Africa will become open for legal review thereby drastically lowering the costs of renegotiation (even for the dictators who singed them). 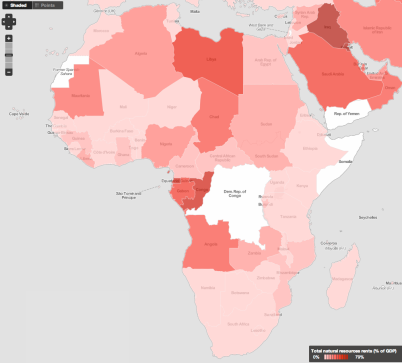 Source: The World Bank. Click on image to enlarge

This map shows resource rents as a share of GDP for the period 2009-2013. Note that the colouring on the map is about to change, with the Indian Ocean east coast getting some of the hydrocarbon action that has hitherto been a preserve of the Atlantic coast and a couple of landlocked states like Chad, Sudan and South Sudan (The biggest change in West Africa will most likely be in Guinea once the mining of its high grade iron ore in the Simandou Mountains gets going. A few contractual and logistical hurdles still stand in the way of the mega mining project).

As you may have guessed Mozambique is by far the country to watch out for as far as the ongoing eastern African resource bonanza is concerned. The country will continue to see a rapid rise in coal production, ultimately producing an estimated 42 million tons in 2017. Mozambique’s Gold production is also expected to more than triple by 2017 relative to its 2011 level. Estimates suggest that based on the full capacity exploitation of coal and gas alone the Mozambican economy could rise to become SSA’s third or fourth largest (after Nigeria, South Africa and (or ahead of) Angola). Going by the 2012 GDP figures from the Bank, that would be a change from US$14 billion to about $114 billion.

Have you enrolled in Portuguese classes yet?

As Mozambique gets wealthier in the next five years at a vertiginous pace, it will be interesting to see if it will go the Angola way. Both are former Portuguese colonies that had drawn out civil wars. Both tried to have democratic elections but then the ruling parties managed to completely vanquish the opposition. And both continue to be ruled by overwhelmingly dominant parties that appear to have consolidated power.

My hunch is that Mozambique is different, as FRELIMO is less of a one man show than is the MPLA. Indeed FRELIMO just selected a successor to Guebuza, the Defense Minister Filipe Nyusi (Nyusi’s background in engineering and the railway sector should prove useful for the development of the country’s coal industry).

The Tanzanian model of dominant/hegemonic party with term limits appears to have spread south. And that is a good thing. The other African country that appears to be embracing this model is Ethiopia (I think I can now say that the Zenawi succession was smooth and that Desalegn, also an engineer, is credibly term limtied).

Kampala, Kigali and Yaounde should borrow a leaf from these guys (that is, as a second best strategy given that their respective leaders do not seem to be into the idea of competitive politics).

For more on the politics and management of natural resources in Africa see here, here and here.