This is from the China-Africa Project:

In purely economic terms, China matters a LOT to Africa but Africa is effectively meaningless to China. Last year, China did more than $4.14 trillion in total global trade. So that means Africa represents just 4.8% of China’s global trade balance, effectively a rounding error for the world’s second-largest economy.

For some additional context, consider that China does more trade with just Germany ($225.7 billion)  and about the same with Australia ($194.6 billion) than it does with all of Africa.

The number of students globally joining Chinese universities surged sixfold in the 15 years to 2018, rising from 77,715 in 2003 to 492,185 last year, according to the Chinese Ministry of Education.

Over the same period, the number of African students in Chinese higher-education institutions increased an astounding fortyfold, jumping from about 1,793 in 2003 to 81,562, last year, according to the Chinese education ministry’s statistics.

With that increase, Africa had the most students in China of any region after Asia, which sent 295,043 students to Chinese universities last year.

According to this report, in the 2017/18 academic year US universities had a total of 39,479 African students.

China just finished a 150 million Yuan four-year project to build Burundi a new presidential palace in Bunjumbura. This is but one of many installments of China’s ongoing influences on civic architecture on the Continent. The Burundian presidential palace is grand, and sitting on an elevation appears to have been designed to project the occupant’s power. While likely not the best use of that much money in Burundi, it is an important investment in the physical manifestation of Burundian stateness.

Other major civic buildings on the continent funded and (to be) built by China include the African Union headquarters in Addis Ababa, Ethiopia, the ECOWAS headquarters in Abuja, Nigeria, and Senegal’s Museum of Black Civilizations in Dakar. 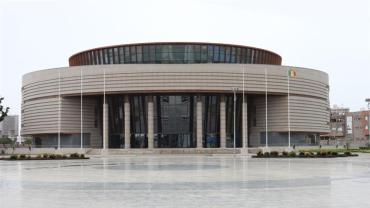 The Museum of Black Civilizations in Dakar, Senegal

Concerns over costs (and espionage) aside, one of the under-appreciated effects of Sino-Africa relations in China’s continuing influence on African architecture. From train stations, to hotels, to high-rise apartment blocks, to libraries, China’s influence is making an indelible mark on Africa’s landscape. At the moment much of this appears to be cut-and-paste jobs with little, if any, African influence. But it is ineluctable that over time many of these foreign designs will be infused with local sensibilities and tastes in the continuing process of architectural evolution on the Continent (no more fake marble and chandeliers please!).

It is fair to say that the state of civic architecture in many African states is wanting. Many civic structures exist as physical embodiments of the malaise afflicting the African state.  The last golden age of public buildings died with the independence generation. The era’s designs focused on function, but also the implicit desire to project state power — Dar es Salaam’s austere public buildings with their long hallways and exposure to the elements (for ventilation) quickly come to mind. The economic crises of the long decade (1980-1995) virtually stalled much of the region’s architectural evolution as far as civic buildings were concerned.

The current iteration of Sino-African relations is changing this. More capitals (sub-national, national and regional) are seeing the construction of civic buildings befitting their stature. The influence of these developments will likely travel beyond their aesthetic impacts on Africa’s architectural landscape. Civic buildings are also monuments to the idea of the state.