Back in 1972 Stanford psychologist Walter Mischel conducted experiments in which he claimed to show a correlation between patience and later success in life – in the experiment kids who could wait for 15 minutes before getting two marshmallows, instead of eating one immediately, were likely to be more successful and self-controlled later in life. Michel attributed patience and self-control to some of the kids’ innate capacities.

It turns out that that might not be the case after all. Researchers in Rochester revisited the experiment and show that kids’ choices over whether to wait or not are “moderated by beliefs about environmental reliability,” in other words, kids react rationally to the proposed deal based on prior experience.

According to Celeste Kidd (more on this here), a University of Rochester grad student and lead author on the study:

“Being able to delay gratification — in this case to wait 15 difficult minutes to earn a second marshmallow — not only reflects a child’s capacity for self-control, it also reflects their belief about the practicality of waiting,”

“Delaying gratification is only the rational choice if the child believes a second marshmallow is likely to be delivered after a reasonably short delay.”

This reminded me of the interesting works in economic history (gated, sorry) that try to tackle issues of culture and socialization and their role in economic development. The punchline from these works is that group-specific socio-cultural values have long-lasting effects on attitudes towards investment, saving, entrepreneurship and ultimately economic development (Think of the fabled frugality and self-discipline of Weber’s protestants). Putting some of the critiques of these works aside for a moment, they are a reminder of just how COMPLEX development is.

Because material conditions both shape and are a result of prevailing cultural norms and practices (both Marx and Weber were right!) it becomes difficult to change one thing while ignoring the other (And this is even before you open the pandora’s box, viz: POLITICS). To put it simply, you cannot increase the investment rate in a society simply by throwing money at people. They will spend it on a new shrine for their god or marry a third wife.

This is not to say that it is impossible to transform entire societies in a short while, just that it is not easy, and that we should be humble enough to accept this fact when thinking about how to promote economic development in the bottom billion societies of the world.

This year’s annual conference of the Stanford Forum for African Studies will be held October 26-27, 2012 at the Stanford Humanities Center. All are invited to attend. Guest speakers include Francis Nyamnjoh (University of Cape Town) and Senegalese writerBoubacar Boris Diop, best known for his book, Murambi.

The full conference program can be found on the SFAS website. 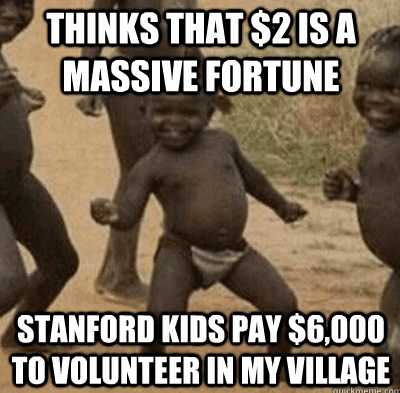 SAF is organized by a multinational and multidisciplinary group of Stanford University students who share a common passion: a firm belief in the potential and promise of the African continent. Previous editions of the Forum have placed the spotlight on this potential and we plan to continue in this tradition with the 2012 edition.

“A team of University of Oregon economists probes one of life’s age-old questions: Is there a relationship between academic gender gaps and a university’s football team’s performance?

The answer looks to be yes. In a National Bureau of Economic Research paper this month, economists Jason Lindo, Issac Swenson and Glen Waddell tracked how much female students at the University of Oregon were outperforming male students on grade point averages. They then mapped that against the number of wins the school’s football team had that season. And they found that, when the Oregon Ducks did better, the male students did worse.”

Would be interesting to see how Stanford undergrads have done in the last couple of years when one Andrew Luck has shown the world to not only respect but also FEAR THE TREE.

I doubt my microeconomics prof. (Kyle) reads this blog so I am gonna go ahead and quote a section of an email he just sent out (which also just made my evening):

For fun for those of you still reading, you can find a lyrical justification of monotonicity in consumer choice in the song Society by Jerry Hannan.  This was covered by Eddie Vedder of Pearl Jam for the film Into the Wild.  The free version can be listened to here jerryhannan.com.  The justification is contained in this stanza:

“There’s those thinking,  more or less, less is more
But if less is more, how you keepin’ score
Means for every point you make your level drops
Kinda like you’re starting from the top
You can’t do that.”

QED.  There you go.  An indie folk proof for rational preferences.

That railroads were political animals was the truth of The Octopus, even if the power Norris attributed to them did not necessarily always exist …. The Octopus raised questions that later critics of the Robber Baron school, dismayed by its exaggerations, largely dismissed. They threw the baby out with the bathwater. They did not spend much time on a central contention of the Robber Baron literature: that many entrepreneurial fortunes had as much to do with corruption of the political process as with success in selling transportation, and that such entrepreneurial success had long-term costs for society.

….  Leland Stanford was the president of the Central Pacific Railroad and its public face from its founding until his death…. In 1885 Stanford bought his way into the US Senate.

The above excerpts come from the book Railroaded, by Richard White. It is a fascinating read about America’s railroad men at the height of the Gilded Age. This was a time in American history in which politics and business were shamelessly linked to one another. Famous men such as Stanford, Crocker, Adams and Huntington were in the business of openly bribing legislators in order to protect their monopolies and suppress investigations into their insider dealings.

The book is a bit long – not even two days on the TAZARA was enough to finish it. But it is a fantastic read. It is also a lesson in development economics. Through corruption and control of government America’s Robber Barons managed to accumulate capital that would later on fuel development in other sectors of the economy. Having political control granted them the chance to reduce their political risk. By the time real democracy and the anti-monopoly crusade caught up with them the “damage” had been done. America had its railroads which enabled transcontinental trade in an age before the massive interstate highway system.

The big lesson here is that de jure rules oftentimes do not matter much for institutional development. It is the de facto balance of power (both political and economic) that does.

Eventually America had enough railroads competing against each other such that the ensuing interest alignment resulted in some railroad companies allying with anti-monopolists to “rat out” their competitors. And with that came proper regulation.

Railroaded is a book about big business, politics, human rights and the fallibility of even the greatest of men (very few women are mentioned in the book.) The men of the Gilded Age laid the groundwork for the American corporation and the American love of risk. Bankruptcies did not come with indelible stigmas. They were mere speed bumps. It was also an era in which Chinese, African Americans, and recent European immigrants were exploited for the sake of the bottom line. What mattered was how much could be squeezed from workers, the government and one’s business associates.

Add the book to your reading list if you care for economic and political history.

In case you missed it, Zambia is a middle income country – at least according to the Bank. This sort of shows in some parts of Lusaka. But Zambia is also a highly unequal and very poor country. Most people in the countryside have nothing else to do but subsistence farming and burning charcoal. The economy is also heavily dependent on mines and foreign owned consumer goods outlets from South Africa and beyond. Which is sad really, given how much arable land it has.

Does anyone know why Zambians use military time? Forget 4 PM, it is 16 hours in Zambian time. The people I have asked have speculated that it is a legacy of the mining industry. I find it fascinating. Taxi drivers think I am weird every time I bring it up.

Also, why is everyone in Lusaka out to some workshop???? Seriously. This is a big problem here. I have had to cancel about five appointments because the only person at the office was the security guard. When do people have time to do their work?

Moving a bit beyond Zambia, be sure to follow the Kenyan cases at the ICC. I am withholding blogging on the issue until the pre-trial judges make their decision. Whichever way they go it will have important ramifications for Kenyan politics. Next year is a make or break for Kenya.

Be sure to check out the Economist’s piece on South Sudan. The teething problems for the new nation will be epic and will take time to go away.

And lastly, check out Jim Fearon on Libya. HT Platas-Izama, who has a new blog here.

This weekend the Stanford Student Forum for African Studies is hosting a conference on health and governance in sub-Saharan Africa. If you are in the bay area feel free to show up for any of the panel discussions.

The Economist has an interesting debate going on about Africa’s growth prospects. The consensus appears to be that structural factors – such as institutions, culture, colonial history and what not – are the main culprits in the tragic tale of African underdevelopment. I agree. Bad governance, the historical accident of colonialism which halted the natural processes of state formation, among other things such as historical low population densities and a culture that mystifies most things are what continue to deter African nations from realizing their full potential.

“most African countries are trapped at a “low-trust” equilibrium where basic property rights are not enforced and corruption is rampant. Essentially if I do not expect others to fulfil their side of the contract, it is rational for me not to fulfill mine, and transactions eventually disappear“

One of my favorite economists, Daron Acemoglu, adds that:

But Lant Pritchett is quick to remind us of the folly of lumping all the sub-Saharan African countries together, pointing out the stark differences between places like Botswana and Somalia or Cote d’Ivoire and Mozambique.