On Thursday President Uhuru Kenyatta presented his annual report to the joint session of Parliament. You can find the text of the speech here and the youtube clip here.

Key achievements of his administration over the last three years include (i) rural electrification (nearly all primary schools have been connected to the grid — THIS IS PRETTY BIG DEAL); (ii) the construction of a new railway line (the project is a corruption boondoggle, but the speed with which it is being carried out is stunning); and (iii) power generation.

Below is a word cloud showing some of the issues the president focused on. Corruption, health (hospital), security, and general service provision were the main policy areas that the president chose to focus on.

I was surprised by the failure of “agriculture”, “land”, “education”, and “infrastructure” to make the top twenty. “Road” had a respectable show. There was also a lot of politics — mainly directed at the opposition and civil society. 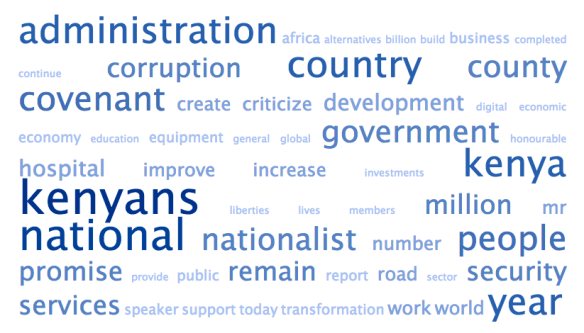 Perhaps in reaction to David Ndii’s provocative article on the failure of the Kenya Project, the president’s speech was particularly nationalist. The words “Covenant” and “Nationalist” appeared 27 and 22 times, respectively, well ahead of key policy-related terms.

I am personally worried that the word “development” outperformed “economic/economy.” I hope this is not a signal that the government views the running of the economy as a massive “development project.” We all know how those usually turn out.