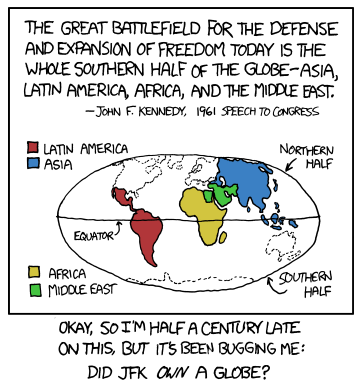 And on a slightly less serious note,  did you know that it is completely artificial that we have North at the top of maps?

The Christian Science Monitor reports on the robbery that most African governments (in this case in the DRC) continue to visit upon their people, unabated. Some of the deals they make sound so bad they’d embarrass a two year old.

Gertler was just 27 when he first became involved in the Congo in 2000, obtaining a monopoly of diamond exports (worth around $600 million) in return for $20 million. He had previously been involved in diamonds in Angola and he is the grandson of Moshe Schnitzer, the founder of the Israel Diamond Bourse. He is now one of the richest Israelis.

Industry insiders, however, suggest that the last big round of mining concession acquisitions happened just before the last elections and helped the president raise funds for his expensive campaign. The next elections are in 2011.

Also, Tech crunch has a nice piece on how the future belongs to the global south

Still talking about poverty and human rigths, Bill Easterly gives the last word on the debate. If you haven’t read the first two posts on this just scroll down Bill Easterly’s blog.

The dysfunction within the UN system is common knowledge. I am a believable in UN causes such as humanitarian relief, peacekeeping and protection of the environment. However, when things get abstract or unenforceable, I am usually disappointed by the UN’s proclivity to shift to issuing statements and pronouncements that it cannot enforce or does not want to enforce.

Here is Bill Easterly’s take on the UN’s definition and pretension to enforce the observance of human rights.