This is from Presidential Power:

The August 2017 elections in Angola represented a case of electoral succession in the sense that the new president comes from the same party of the outgoing president; however, it is a case of nonhereditary succession. João Lourenço was not Dos Santos’ first choice (he even tried to revert the MPLA candidates’ list for the 2017 elections) and speculation around the leadership succession pointed to his eldest son, José Filomeno dos Santos (aka Zénu). 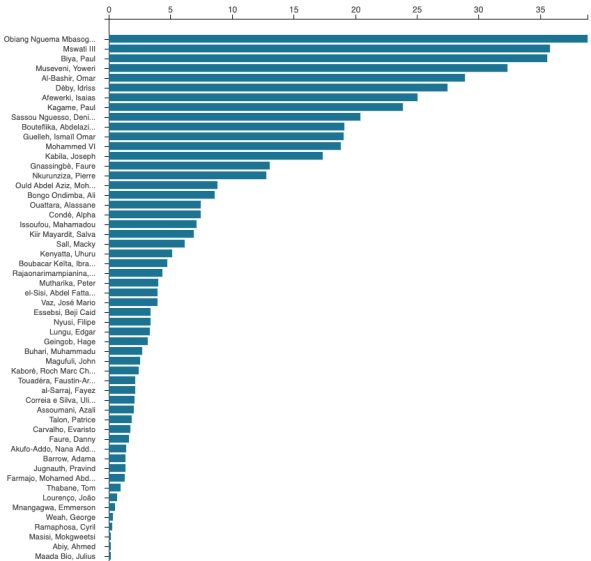 In less than a year in office, the new president began to remove members of the Dos Santos clan from Angola’s epicenter of political and economic power. João Lourenço deposed Dos Santos’ daughter and one of the richest woman in Africa, Isabel dos Santos, from the presidency of the state oil company, Sonangol. Also, her half-brother, José Filomeno dos Santos, was removed from the chairmanship of Angola’s $5 billion USD sovereign wealth fund (FSDEA).

… these removals have been effortless, as the former president’s family neither receives the MPLA’s support nor enjoys popularity. Furthermore, João Lourenço’s actions affecting Dos Santos’ family increased his popularity levels inside and outside the ruling party and thus didn’t allow the former president to stand up for his targeted family members, as pointed out by Ismael Mateus.

Angola’s political transition is an important lesson on the dangers of institutionalized autocracy. Dos Santos’ investment in a strong MPLA made possible the seamless transition and the power shift to the new president. Convinced of continued stability in the absence of the old president and the party’s ability to handle the transition, Angolan elites were willing to let Dos Santos step down and to bandwagon with the new president once he ascended to power.

“Smarter” (and arguably weaker) autocrats know to ensure that there is no alternative focal center of power around which elites can mobilize — whether in the form of an institution or individuals. This is the Biya/Museveni/Obiang/Eyadema/Afeworki playbook.

All to say that autocracies with strong ruling party traditions on the Continent (in Angola, Ethiopia, Mozambique, and Zimbabwe) are different from the individual-centered operations across the region — in places like Cameroon, Chad, Burundi, Rwanda, Togo, and Uganda.

More broadly, across the Continent turnover dynamics are interesting in autocracies and democracies alike. Botswana’s incumbent Mokgweetsi Masisi quickly fell out with his predecessor Ian Khama after taking office. South Africa’s Cyril Ramaphosa will likely go after Jacob Zuma after this month’s election. Policy and personal differences between incumbents and their predecessors hold the promise of creating stronger incentives for institutionalized rule and constitutional protections of retired elites’ civil liberties (and the wider population as well).

Sisonke Msimang has a nice take over at FP:

Zuma was elected president of the ANC in December 2007 in a bitter and bruising battle against Mbeki, the man who had sacked him just a few years earlier. The following year, the ANC recalled Mbeki, triggering his resignation as president of the country.

Zuma bested his opponent in 2007 by gathering a coalition of the wounded. At the time, there were various factions within the ANC that felt aggrieved by Mbeki’s leadership style and by his economic conservatism. Many on the left within the party believed that in their haste to appease the markets and encourage international investment, the ANC’s leaders had conceded too much terrain to big business in the years following apartheid.

Zuma was known as an affable but flawed man. Union leaders and young radicals opposed to Mbeki — men such as Julius Malema, who was then the head of the ANC’s Youth League, and Zwelinzima Vavi, who headed the Congress of South African Trade Unions at the time — saw the man they were installing as malleable. They hoped Zuma would promote pro-labor and pro-poor policies, so they struck a Faustian bargain. Despite his obvious personal shortcomings, and the significant political liabilities he carried, they agreed to put him in power if he allowed them to run economic policy.

Being an economic conservative, albeit without Mbeki’s professorial demeanor, I am curious to see how President Cyril Ramaphosa will navigate popular demands for a renegotiation of the post-apartheid settlement which he helped midwife. Also, as corruption in South Africa did not begin with Zuma (or the end of apartheid), it will likely not end with his departure. Perhaps the biggest challenge ahead for the ANC will be to temper expectations. If Ramaphosa is seen to be too close to South Africa’s economic elite, it might elicit a populist backlash with dire economic and social consequences for South Africans.

A lot has been written about Jacob Zuma’s failures as president of South Africa, most recently his odd decision to fire his widely respected finance minister, Nhanhla Nene. Zuma replaced Nene with an unknown ANC MP, David van Rooyen, only to replace van Rooyen with former finance minister Pravin Gordhan after intense pressure from the media and the markets.

Sources indicate that Mr. Nene was fired for holding the line on fiscal discipline.

Much of the analysis so far has focused on President Jacob Zuma — his increasing personalization of power within the ANC, corruption, and even his private life.

But in an interesting piece Andile Mngxitama questions this Zuma-centric narrative, instead focusing attention on wider policy failures within the ANC. Mngxitama argues (correctly, I believe) that:

Both Mbeki and Zuma are ANC cadres through and through and it’s the party policy that determines what they do. Zuma has not strayed from the ANC policies and no one has yet made this claim in any meaningful way. So, if it’s not policy that is the problem, how do we judge Zuma’s performance?

The main problem is that his detractors fundamentally agree with the ANC policies and they have therefore chosen to find fault with Zuma the man and thereby rob us of a useful analysis of why things are falling apart. A shift from Zuma to policy would also show that his presidency is a product of policy; the template for things to fall apart was designed by his predecessors.

Zuma’s sin, which has been missed by the analysts, who are too driven by “Zumaphobia”, is that he has not been able or willing to halt the downward spiral, which is essentially a byproduct of ANC policies. The main policy plank of the ANC since it took over in 1994 has been correctly described as neoliberalism – the privileging of capitalism as the driver of society.

The implications of this policy direction are to increasingly remove the state from society and the economy and allow the profit motive to determine who gets what service. The state privatises assets and those it keeps are similarly managed as if they are capitalist entities.

The piece at times sounds anti-market. But don’t let that distract you from its succinct understanding of the political economy challenges facing South Africa.

In 2008 the ANC recalled then President Thabo Mbeki. There is no reason to believe that President Jacob Zuma has totally eclipsed the party machinery. Indeed this has been made clear by his quick retreat after the brazen attempt to weaken the finance ministry.

Recent events in South Africa suggest that the party of Mandela is no longer(if it ever was) the voice of the people. But this outcome cannot be pinned on Zuma. The party elite, including Zuma, largely remain hostage to the post-apartheid political settlement. Meanwhile, the country’s deplorable economic indicators are adding fuel to the fire that is the Economic Freedom Fighters (which is increasingly sounding more and more mainstream and in tune with the frustrations not just of South Africans, but younger Africans in general north of the Limpopo). On a recent tour of London the EFF leader, Julius Malema, held meetings with CEOs of companies with interests in South Africa — a signal that these companies appreciate the potency of his message of economic freedom.

Rainbowism and its most important articles of faith – truth, reconciliation and forgiveness – is fading. Reduced to a totemic commodity figure mostly destined to assuage whites’ fears, Nelson Mandela himself is on trial. Some of the key pillars of the 1994 dispensation  – a constitutional democracy, a market society, non-racialism – are also under scrutiny. They are now perceived as disabling devices with no animating potency, at least in the eyes of those who are determined to no longer wait. We are past the time of promises. Now is the time to settle accounts.

But how do we make sure that one noise machine is not simply replacing another?

That is Wits professor Achille Mbembe writing on the state of politics in South Africa. The whole piece is definitely worth reading (also liked this response from T. O. Molefe).

Economic elites in South Africa (both black and white) are playing with fire. The lessons of Zimbabwe were not learned. The implementation of Mugabe’s land reform project was a disaster, but there is no question that the levels of land inequality in Zimbabwe were simply politically untenable. Something had to give.

One need not be against everything neoliberal (whatever that means) to acknowledge that the same situation holds in South Africa, and that something will have to give. Consider Bernadette Atuahene’s observations on the land situation in South Africa:

When Nelson Mandela took power in South Africa in 1994, 87 percent of the country’s land was owned by whites, even though they represented less than ten percent of the population. Advised by the World Bank, the ruling African National Congress (ANC) aimed to redistribute 30 percent of the land from whites to blacks in the first five years of the new democracy. By 2010 — 16 years later — only eight percent had been reallocated.

In failing to redistribute this land, the ANC has undermined a crucial aspect of the negotiated settlement to end apartheid, otherwise known as the liberation bargain. According to Section 25 of the new South African constitution, promulgated in 1994, existing property owners (who were primarily white) would receive valid legal title to property acquired under prior regimes, despite the potentially dubious circumstances of its acquisition. In exchange, blacks (in South Africa, considered to include people of mixed racial descent and Indians) were promised land reform.

Rapid economic growth and mass job creation could have masked the structural inequalities that exist in South Africa. Instead the country got Jacob Zuma and a super wealthy deputy president (and BEE beneficiary), both of whom are singularly out of touch with the vast majority of South Africans.

There is no doubt that South Africa needs a complete reorganization of its political economy. The question is whether the process will be managed by a “moderate” outfit like the ANC; or whether leaders will continue to sit on their hands and allow voices of less moderate groups like the Economic Freedom Fighters to gain traction.

ps: Just in case it is not obvious, South Africans are unambiguously better off now — as a people — than they were under apartheid rule.