Florence, a publishing executive, has also received an email from Standard Chartered Bank informing her of changes in her interest rates from 17.5 per cent to 27 per cent effective November 19.

….. Last week, a Nairobi-based Chinese developer had his overdraft facility of $10 million reduced by half, and his $30 million loan negotiations on a new project put on hold after the bank informed him of its intention to use a new interest rate of 28 per cent instead of the earlier 19 per cent for the housing project.

28% on a $30m loan. Think about the returns that make such an investment remotely imaginable.

Basically what is happening in Kenya is that government borrowing, coupled with an inflation-wary central bank, has dried up the credit market. It is unfortunate that misperceptions of risk continue to limit entry of global firms into the finance space in many emerging economies like Kenya’s. The Kenyan government is now paying more than 20% on short-term domestic debt. Think about that for a second.

Over the last two decades there has been a remarkable shift in the composition of domestic government debt in Kenya, with long-term debt instruments (bonds) increasingly preferred to short-term debt (T-Bills).

The financial market in Nairobi is telling us a thing or two about creditors’ perceived time horizon of the Kenyan government; and Treasury’s capacity for credible commitment. 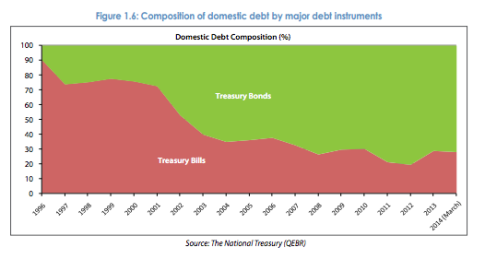 For curious readers, I would argue that the explanation for this structural change (especially after 2003) is more Stasavage than North and Weingast.

For once Kenya has a responsible academic running the Central Bank of Kenya (CBK). Prof. Njuguna Ndung’u has exuded nothing but confidence in his first term in office. Given that finance is a confidence game, this has been a most welcome scenario. It is therefore weird that there are MPs out there crowing that his reappointment be reviewed. Given the country’s political temperature this seems like a misguided move. You remove Prof. Ndung’u and you might end up with someone who is down with printing money to pay for next year’s elections. I say let’s not play politics with the Central Bank.

I fully support Prof. Njuguna Ndung’u remaining as CBK governor. Just one request, echoing Jaindi over at the Daily Nation:

A piece of advice for Prof Ndung’u. You will go down as the best governor in the country’s history if you get the banks to reduce banking spreads. Commercial banks are fleecing borrowers.

Already within central Kenya cracks abound in the political mold. Ms Martha Karua and Mr. Peter Kenneth are rival contenders, with Mr. Kenyatta, in the Kibaki-succession game. Also in contention are the acephalous “Kikuyu underclass” which has felt sidelined and maligned by the wealthy ruling class from the region since independence. The Mungiki movement is a potential channel for this group to articulate their demands. The election of the likes of “Sonko” and Waititu in Nairobi may be a signal of things to come in 2012. The fight between the country club elite and the matatu generation appears almost inevitable. Should Mr. Kenyatta go down with the ICC process there will certainly be someone on the wings to take his position.

The situation in the Rift Valley is different. Mr. Ruto, like Mr. Odinga in Nyanza, hogs all the political power without any clear contenders on the wings. Should the Eldoret North MP go down with the ICC process, the Rift Valley caucus may end up divided and politically weakened, just like happened in Western Kenya after the death of Kijana Wamalwa. Possible unifiers in a post-Ruto era include Dr. Sally Kosgey and Mr. Samuel Poghisio.

What does all this mean for Kenyan politics?

Firstly, Kenya’s emboldened parliament will have to make the right calls as it continues in its march to become the sovereign in the land. If MPs choose to settle their differences over the ICC’s indictment of their men in the august house it will become a lose-lose situation. The new constitution will not be implemented as intended. Kenya may have to go through a snap election. And in the worst case scenario ethnic tension may explode into full out violence, again.

Secondly, president Kibaki must take charge. Even as he allows his lieutenants room to craft their means of political survival he must make sure that the impression that someone is in charge remains unshaken. The last thing the country needs is a feeling of a free for all situation.

And lastly, Mr. Odinga must not play petty politics with the ICC process. It is obvious that if everything works for Ocampo Mr. Odinga will be the biggest winner. But he must show restraint and calmness. The ICC process must not be made to appear to be a political witch hunt. In any case 2012 is still eons away in political terms. Plus he must consider the impression he will create if he is seen as completely throwing Ruto and Kosgey under the bus, two men who worked hard and delivered him the Rift Valley vote in the 2007 general election.

My take on the latest developments is mixed. On the one hand I like the move to end impunity. 1333 Kenyans died. Those who planned their murder should face justice. On the other hand I know that justice is political. And politics is messy. Perhaps the two principals (Kibaki and Odinga) could cut a deal with Ocampo to rescue their lieutenants in exchange for the latter staying out of politics (and perhaps serving a suspended sentence in Kenya) and contributing some of their wealth to the resettlement of displaced persons from the PEV chaos.

How I wish the whole nation wasn’t so fixated on this but on what Prof. Ndung’u of the CBK has to say about the state of the Kenyan economy or the latest projections on the state of the country’s financial, agricultural and manufacturing sectors.

I hope that Kenya’s captains of industry will not play politics but instead fund the right guys: guys who want macroeconomic and political stability so that more and more equities, access Kenyas and safaricoms can bloom in Kenya.

Bankelele has a ranking of the biggest banks in Kenya (2009 rankings). Barclays, KCB and Standard Chartered are the top dogs. Equity is the biggest upstart (the top three banks were around in 1968). 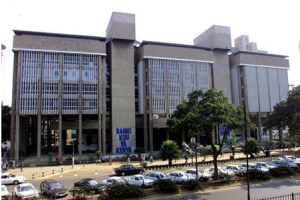 Certainly, more innovation and public regulation (by which I mean property rights protection and incentives for growth of contract intensive money) needs to be instituted in order to promote growth and diversification of financial services.

The prevailing interest spread in Kenya is ridiculous; the Central Bank rate is 6% while the commercial banks lending rate is 13.85%. (Njuguna Ndung’u, the governor of Central Bank of Kenya (CBK) should do something about this). The mortgage market needs a shot in the arm (the demand is high but financing is maddeningly expensive). And the country could do with a more robust household credit system. Even the middle class does not earn enough to buy all they need in cash. Borrowing against future prosperity (under a regulated system, of course) is not such a bad idea. More substantively, it is an implicit investment in the future.

Occasionally I come across news that make me think that Kenya is still on the right track. The circus that is the current debate on the review of the constitution is definitely a reminder that the east African nation has a long way to go. But things are looking better elsewhere. For one, more Kenyan businesses (which include some of the noisemakers in parliament and their relatives) are lending to the central government. This is encouraging news in two ways:

First, it means that more people are investing in Kenya Co. and therefore will have incentives to make sure that the country does not go the way of the Ivory Coast.

Second, it means that more of the idle capital will get utilized in the provision of public goods, albeit inefficiently. They may have been late and not smartly implemented but I was quite impressed by the Finance ministry’s counter-cyclical policies to alleviate the effects of the slump. Job well done.

Now if only we could find a way of pooling all the cash that routinely gets used to over-subscribe to IPOs and package it in order to meet the treasury’s minimum requirement for investment in public debt. It would be kind of neat to see millions of wananchi investing in their own country. In this way they can indirectly pay taxes while at the same time strengthening the social contract because they will have incentives to monitor how government spends the money they loan it. Just a thought.