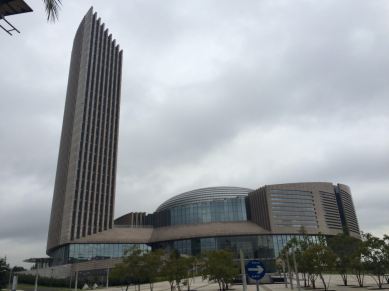 African heads of state thought they were getting a free lunch from China with its offer of a new building to host the African Union.

But it turns out that what they got, instead, was a building that vacuumed African Union secrets to China.

According to the Mail & Guardian:

China built and paid for the African Union’s computer network – but inserted a backdoor allowing it access to the continental organisation’s confidential information.

This is from Le Monde:

At the headquarters of the African Union (AU), in Addis Ababa, elevators still speak Mandarin and the trunks of the plastic palm trees are branded China Development Bank.

In January 2017, the small computer unit of the AU discovered that its servers were strangely saturated between midnight and 2 am. The offices were empty, the activity was dormant, but data transfers were at a peak. A zealous computer scientist then looked into this anomaly and realized that the internal data of the AU were massively diverted. Every night, the secrets of this institution, according to several internal sources, found themselves stored more than 8,000 km from Addis Ababa, mysterious servers hosted somewhere in Shanghai, the Chinese megacity.

A couple of reactions:

Le Monde reports that the task of safeguarding the AU’s data has been assigned to Algeria.

Since then, the AU has acquired its own servers and declined China’s offer to configure them . On the ground floor of the glass tower, in a room that goes unnoticed, is a data center that focuses much of the information system of the organization. All electronic communications are now encrypted and no longer pass through Ethio Telecom, the public operator in Ethiopia , a country renowned for its cybersurveillance and electronic espionage capabilities. From now on, the highest officials of the institution have foreign telephone lines and more secure applications.

China denies Le Monde‘s findings. So does the Prime Minister of Ethiopia, arguing that China cannot be spying on the African Union because “There is nothing to be spied [on].”

Perhaps he is right.