Low-income states struggle to collect taxes. And with low fiscal capacity comes the inability to spend any money on vital public goods and services. Take Nigeria, Africa’s biggest economy. The country struggles to collect income tax, and heavily relies on revenues from oil (58.1% of revenues in 2018) and indirect taxes. Nigeria also spends precious little on its people. In 2018, general public expenditures added up to a paltry 10.9% of GDP (believe it or not, Nigeria is a libertarian paradise!). In comparison, public expenditures in Kenya amount to about a quarter of GDP. In 2018, income tax accounted for 47.9% of Kenya’s total tax revenue haul.

The demand for public expenditures will only continue to rise as African countries get richer. Overall, government expenditures as a share of GDP tend to rise with income. For instance, in 2017 the expenditures among OECD states ranged from a low of 26% of GDP in Ireland to 56.4% in France. It goes without saying that any future increases in government spending in countries like Nigeria will require ever more efficient means of tax collection. But such moves will likely be hampered by the illegibility of taxpayers.

Enter Russia. According to the FT, Moscow is pioneering real time tax administration:

Standing in front of a huge video wall, Mikhail Mishustin, head of the tax service, prepares to show off its capabilities. “Where did you stay last night?” he asks. When I reply, his staff zoom in on a map to Hotel Budapest on the screen. “Did you have a coffee?” His staff then click on the food and drink receipts in the hotel from the previous evening. “Look, it sold three cappuccinos, one espresso and a latte. One of those was yours,” Mr Mishustin declares triumphantly. He was right.

This is the future of tax administration — digital, real-time and with no tax returns. The authorities receive the receipts of every transaction in Russia, from St Petersburg to Vladivostok, within 90 seconds. The information has exposed errors, evasion and fraud in the collection of its consumption tax, VAT, which has allowed the government to raise revenues more quickly than general Russian economic performance.

The new system is directed more at shopkeepers than oligarchs. Russia still scores poorly on international league tables of corruption, being ranked only 138 out of 180 on the Transparency International corruption perceptions index, with concerns including cronyism, a lack of independent media and a biased judiciary. But reducing tax evasion among ordinary Russians and highlighting corrupt tax officials have helped raise revenues and clean up the system.

Reasonable people should worry about the potential misuse of these government powers. But remedies to this problem must be tempered with an understanding of the deep structural barriers to poverty alleviation caused by low fiscal capacity (not to mention a weakened fiscal pact between citizens and their governments).

Finally, as correctly noted in the FT piece, technology cannot fix the problem of tax avoidance by the politically-connected. If Russia’s system catches on in low-income countries, it will most likely be effective in widening the tax base among diffused average taxpayers. The hope then would be that higher levels of tax compliance among average taxpayers will create political pressure for the same from the big fish.

This is from Newsweek (highly recommended):

There are new guests at the ruined palace where Emperor Jean-Bédel Bokassa once held court. During his rule over the Central African Republic in the 1970s, Bokassa used a year’s worth of development aid to stage an extravagant coronation, and he personally oversaw the torture of prisoners. He fed some to his pet crocodiles and lions.

But the French government that helped install Bokassa in 1966 ousted him in 1979, deploying paratroopers to prevent any countercoup. Now, four decades later, it is Russian soldiers who mill around this crumbling estate in Berengo—and the shifting power dynamic is raising concerns in the West. President Vladimir Putin is pushing into Africa, forging new partnerships and rekindling Cold War–era alliances. “There will be a battle for Africa,” says Evgeny Korendyasov, head of Russian-African studies at the Russian Academy of Sciences, “and it will grow.”

How did Russia muscle its way into CAR? According to Reuters:

CAR has been under a U.N. arms embargo since 2013 so weapons shipments must be approved by the U.N. Security Council’s CAR sanctions committee, made up of the Council’s 15 members, including France and Russia. It operates by consensus.

France first offered to help CAR buy old weapons but the proposal was too expensive. France then offered 1,400 AK47 assault rifles it had seized off Somalia in 2016, according to a Security Council memo and four diplomats.

Russia objected on the grounds that weapons seized for breaching the U.N. arms embargo on Somalia could not be recycled for use in another country under embargo, two diplomats said. But mindful of the need for a quick solution, the sanctions committee approved Moscow’s donation of AK47s, sniper rifles, machine guns and grenade launchers in December, according to committee documents and diplomats.

Why Russia interested in the CAR now? Possible answers include (i) the potential for lucrative mining deals (Putin’s Chef, Evgeny Prigozhin, reportedly runs a diamond mine near Bangui and a gold mine in a rebel-held area); (ii) the CAR might be a great launching pad for Moscow’s ambitions in the Sahel and therefore a great addition to existing military deals on the Continent; and (iii) Russia’s defense firms might just be in it to run guns and make a quick buck in a country that remains overrun by all manner of rebel groups (some reports claim rebels control 80% of CAR’s territory).

And as for the CAR leadership, they just might be in the mood for a partner that delivers results without too much paperwork and rules:

President Touadéra has a number of incentives to work with Russia rather than France or the United States. Russia’s aid in arming the CAR’s military is a huge boon for the chronically underfunded state. The EU training mission in CAR has been agonizingly slow, leaving an underequipped and undertrained military to face a deteriorating security situation. Russian instructors, while certainly less concerned with the moral or ethical dilemmas of war, may give Touadéra the military he needs to combat the rebel groups across the country.

Alec Luhn of The Telegraph notes that Putin may have padded his total vote tally in Sunday’s election by as much as 10 million votes. The pink area in the graph shows the extra votes in the high turnout areas. 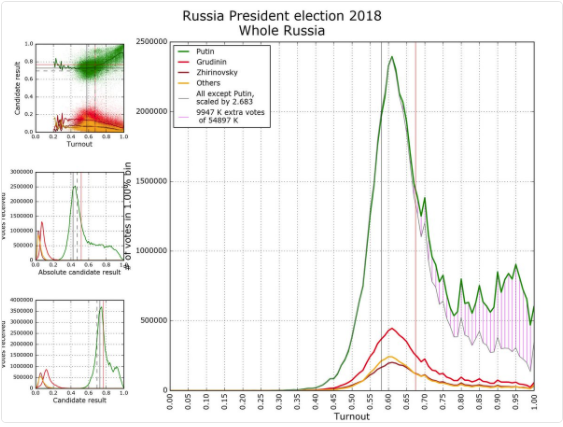 Putin’s autocracy is fairly under-institutionalized, but insights from Magaloni’s canonical study of Mexico’s PRI can explain Putin’s desire to win big. For more on why dictators hold elections in the first place see here (Blaydes, 2011), here (Gandhi, 2008), and here (Gandhi and Lust-Okar, 2009).

Abdoulaye Wade is a study in delegative democracy gone crazy (In the words of Paul Collier, democrazy). Delegative democracy  is the phenomenon of elected leaders going rogue and essentially performing auto-coups (mostly through constitutional gymnastics) in order to entrench themselves in power (see O’Donnell). Leading lights in this regard include Hugo Chavez of Venezuela, the late Frederick Chiluba of Zambia, Vladimir Putin of Russia and Thaksin Shinawatra of Thailand.

Mr. Wade’s latest assault on Senegalese democracy has been his attempts to lower the threshold for the election of a president to a mere 25% down from 50%. He’d much rather win cheap against a fractured opposition in the first round than risk a runoff against a single opposition candidate. After 11 years in power without much to sing about the risk is just too high for the Wade regime. President Wade also wanted to create the position of an elected vice president before the 2012 elections. Many believe that Wade had his son Karim in mind for this new post.

In the end determined opposition protest outside the Senegalese parliament forced the president to withdraw the draft legislation.

If the opposition unites [and that is a big IF], they could beat Mr. Wade in 2012. Frequent power cuts, a flagging economy, rampant inflation and Wade’s brand of crass and tone deaf nepotism (he wants to be succeeded by his own son despite the revolutions the Islamic near-abroad) have served to alienate the aging leader from many voters, particularly in urban areas.

Mr. Wade is expected to run for a third 7-year presidential term next year. He is 85.