This is from The Economist: 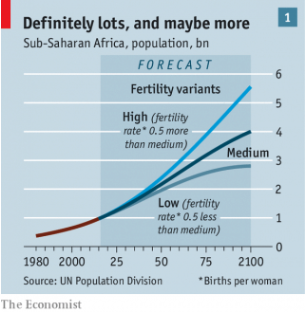 … There is nothing inherently African about large families. Botswana’s fertility rate is 2.6, down from 6.6 in 1960. South Africa’s rate is 2.4. And although the UN has a good record of predicting global population growth, it has got fertility projections badly wrong in individual countries. Sudden baby busts in countries like Brazil, Iran and Thailand caught almost everyone out. Could Africa also spring a surprise?

On balance, I am less alarmed by population growth in Africa than most observers. Female gross secondary school enrollment is at an all time high. Urbanization is apace. Family sizes are most likely to shrink at faster rates than anticipated by current models.

Notice that these are estimates. The Journal reports:

The biggest human increase in modern history is under way in Africa. On every other continent, growth rates are slowing toward a standstill for the first time in centuries, and the day is in sight when the world’s human population levels out.

Billions of them will be living in cities that are today small towns. The land of open spaces that was Africa will have blended into one big megalopolitan web.

…. Kuwait, Gabon, Saudi Arabia, Libya, Algeria, Angola and Nigeria are as urbanized as Uruguay, Taiwan, South Korea, Mexico, Malaysia, South Africa and China respectively, and yet the former countries have not industrialized to the same extent as the latter. This raises several questions. Where do the cities in Angola, Nigeria, and the others come from? Why have so many cities in today’s developing world never been factory cities, in stark contrast to the historical experience of today’s developed countries? If these cities have a different origin, does it matter for economic development?

However, the composition of urban employment differs starkly between resource-exporters and non-exporters, holding constant income levels and urbanization rates. We use IPUMS census micro-data, labor force surveys, and household survey data to recreate the sectoral composition of urban areas for a sub-sample of 88 countries. Using this novel data set, we find that cities in resource-exporting countries are what we term “consumption cities”, with a larger fraction of workers in non-tradable services such as commerce and transportation or personal and government services.1 Cities in countries that do not export significant resources, on the other hand, appear to be “production cities”, with more workers in industrial sectors such as manufacturing or in tradable services like finance.

That is Douglas Gollin and co-authors in a working paper on urbanization with and without industrialization. The authors also find that ceteris paribus “consumption cities” also tend to be marked by higher rates of poverty and greater shares of populations living in slums. In short, and to paraphrase the authors, consumption cities of resource exporters are not as welfare-improving as production cities of non-exporters.

This should worry policymakers across the Continent. Africa is urbanizing fast (see image), but without the benefits of mass job creation. Indeed UN Habitat’s 2014 State of African Cities report warns that urbanization in Africa lacks the potential “to deliver on the aspirations of broad based human development and prosperity for all.” The continent’s “consumption cities” will have significant impact on state economies. Increased imports of consumer goods (and food) will put pressure on currencies, with inflationary consequences (Africa imports $81b worth of agricultural produce annually). Tending to the urban sector will likely lead to further taxation of the rural sector a la Bates.

That said, demography might provide a way out. Africa’s population is also expected to balloon over the next five decades. That might just create big enough domestic markets to make it worthwhile for firms to consider locating their manufacturing bases on the continent. Increases in labor costs in east Asia are therefore a welcome trend.

Even presidents get stuck on bad roads when it rains. Here is President Joseph Kabila of the Democratic Republic of Congo. The DRC has a landmass of 2,267,048 sq km, and 2,794 km of paved roads. 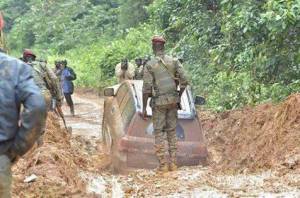 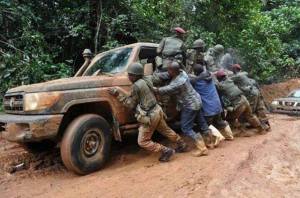 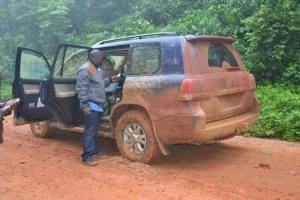 What can be done to increase road access in the DRC? Big projects like this will definitely help. But a big accelerator of the process will probably be urbanization. Kinshasa is the second largest city in Sub-Saharan Africa, after Lagos. Many of you probably have never heard of Mbuji Mayi, a city of about 1.7 million people (Other big cities in the DRC include Lubumbashi, Kisangani, Bukavu, and Kananga, and Tshikapa).

The projected rapid urbanization rate in Africa, and much of the developing world, is often depicted as a disaster waiting to happen (largely due to poor infrastructure and lack of jobs). But urbanization can also be seen as an opportunity to take advantage of economies of scale to provide public goods at a lower cost. It might even have a positive impact on agricultural productivity – by creating reliable concentrated markets in urban areas and possibility through greater levels of land consolidation to take advantage of scale. That said, governments will still have to build major highways linking cities, and farms with markets.