So far it appears that the incumbent Muhammadu Buhari will win reelection. According to Africa Confidential:

His street support is still impressive across the north and he remains a force to be reckoned with – even if his APC allies are divided or upset with the primaries or his overall approach to governance. With the powers of incumbency behind him, he may hold the upper hand. Many of the 21 APC governors will also hold this advantage, but more of them will be vulnerable to PDP challengers, especially in Plateau, Kaduna, Kogi, Imo, and perhaps even Lagos and Kano, although these latter two states look stronger for the APC. 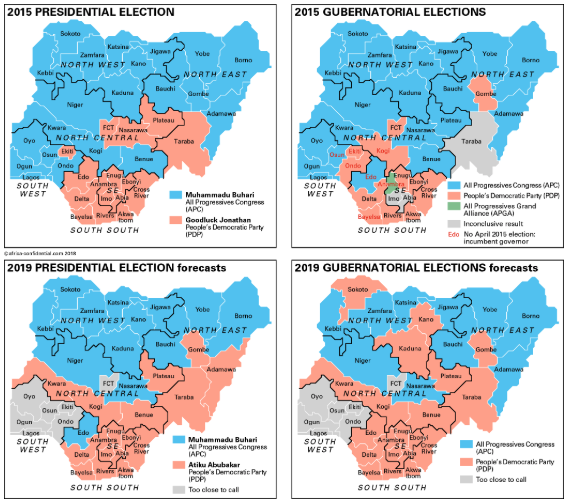 Atiku’s deep experience in election matters may outflank Buhari’s APC handlers, but he will need more than just his deep pockets to outbuy or check the APC machine. He will also need to demonstrate genuine public support, mobilised by a major ground operation backed by local PDP networks.

At 71, Atiku is more energetic and comfortable with speaking on the stump than the taciturn, 75-year-old Buhari. That will be important for reaching Nigeria’s social media-savvy voters, who threw their weight behind Buhari in 2015 but have grown frustrated with his slow pace. If the election does end up close, as appears likely, the APC’s control of the security forces may prove pivotal and provoke a crisis. If, however, Atiku does in fact win and the APC respects the result, as Jonathan did in 2015, Nigerians may at least come to feel that elections, however flawed, can lead to change.

And here’s a great report from USIP on the factors at play in Nigeria’s 2019 elections.