(Not that it used to work that well)

Here is a story on Tanzania:

The day before, the World Bank suspended a $300 million educational loan following a government policy banning pregnant girls from going to school. That ban has been roundly criticized by the development community.

Tanzania most likely anticipated these specific reactions from the donor community.

And now news reports indicate the World Bank is walking back its suspension of the $300 concessional loan. According to the Tanzanian government, the Bank’s projects in Tanzania run to the tune of $5.2b. At some point the Bank’s board’s commitment to human rights and “good governance” runs against the cold calculus of having to signal effort by the amount of cash pushed out the door each year. Also, the net per capita overseas development assistance (ODA) to African states has been in decline over the last five years (see graph).*

For perspective, Tanzania’s budget for 2018/19 fiscal year is $14b. Which means that the total rescinded aid (if the donors keep their word) currently stands at 2.2% of government expenditure. If you factor in the “implementation surpluses” that typically arise due to suboptimal absorptive capacity, it is a wash. All to say that it’s not clear that these cuts (if the donors hold the line beyond the current news cycle) will inflict maximum pain.

How much aid goes into the government’s total budget?

Despite donors not meeting their commitments last financial year, the government expects to raise Tsh2,676.6 billion ($1.1 billion) from development partners which is equivalent to eight per cent of the proposed budget total funding.

In other words, the Tanzanian Treasury (and politicians) can absorb the hit on the country’s reputation emerging from policies and practices like this, this, and this without devolving into a fiscal meltdown.

*Population data from the World Bank. Aid data from Roodman.

The international development bill passed its third reading in the House of Lords on Monday and will now receive royal assent. Britain met the 0.7% target for the first time last year when it spent £11.4bn – or 0.72% of its GNI – on overseas aid.

The 0.7% commitment was established by the UN in 1970. In 2013, only five other countries – Sweden, Norway, Luxembourg, Denmark and the United Arab Emirates – had met or exceeded the 0.7% aid spending target. The Netherlands had consistently met the target, but fell short in 2013.

All well and good.

The question, though, is what proportion of the 0.7% will finance various jobs programs for UK (and other Western) nationals working in the global development industrial complex (or in other sectors that benefit from tied aid) versus actually going to poverty alleviation in the developing world. 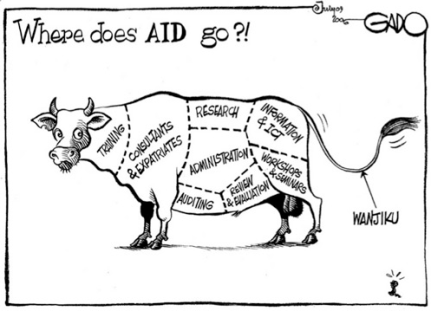 And speaking of the global development industry, here’s a nice quote from the Economist newspaper on SDGs:

Developing countries seem to think that the more goals there are, the more aid money they will receive. They are wrong. The SDGs are unfeasibly expensive. Meeting them would cost $2 trillion-3 trillion a year of public and private money over 15 years. That is roughly 15% of annual global savings, or 4% of world GDP. At the moment, Western governments promise to provide 0.7% of GDP in aid, and in fact stump up only about a third of that. Planning to spend many times the amount that countries fail to give today is pure fantasy.

The backers of the SDGs concede from the outset that not all countries will meet all the targets—an admission that robs the goals of the power to shame. The MDGs at least identified priorities and chivvied along countries that failed to live up to their promises; a set of 169 commandments means, in practice, no priorities at all.

A set of 169 commandments also means fundraising opportunities for everyones’ pet issue. But it also means extra meetings, workshop, and consultants for developing country Civil Servants to deal with; and little time for the boring things that actually contribute to sustainable improvement of human welfare.

Aid Watch has a piece on this very important subject, check it out.

Other stories worth checking out this Friday include Jina Moore’s and the IRIN piece on the food situation in the Sahel.