Forget about the elections in Tanzania or the Ivory Coast. What matters for the American audience as far as news from Africa go are human interest stories such as this one which made it to the front page of the New York Times. 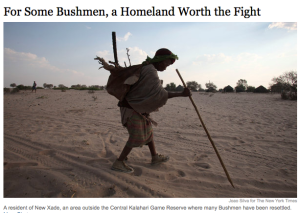 I echo the point of the Times piece. It really sucks being a hunter-gatherer in Botswana. And by extension, it really sucks being a citizen of Chad, Niger, Uganda or any one of the 40 other countries that make up sub-Saharan Africa. Despite the “good news” (see earlier post below) things are really bad on the Continent.

Africa deserves all the bad press it gets. Period. The only problem is that Africans have not been able to participate effectively in the discourse on their continent or attempted to contextualize the bad press. The continent long lost the game of framing the narrative.