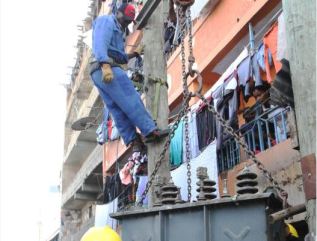 In 2016, as part of Kenya’s electricity expansion project, the World Bank’s Global Partnership Output-Based Aid (GPOBA) partnered with Kenya Power to roll out the slum electrification programme aimed at subsidising the cost of electricity to low-income earners and ending illegal connections.

At one of the sites, 200 KVA ground-mounted transformer had been enclosed in a small stonewalled building from where illegal connections originated. The transformer, which Kenya Power impounded, was next to a six-storey flat that got its supply from it. The rest was supplied to dozens of iron sheet-walled houses and a myriad of businesses. The disconnection of the transformer left dozens of residents without power. The power supply is known as “sambaza” and residents said they paid between Sh200 and Sh700 per month to people they described as “agents.”

Here is the World Bank’s take on its Kenya GPOBA slum electrification project (from 2016). The project had significant political and corruption risk exposure from the start:

The project faced initial implementation challenges. After the project commenced, the average cost of each connection increased to around $900 due to the inflation of input costs. In order to adjust to this increase, GPOBA raised its subsidy from $75 to $125 per connection; IDA and KPLC also increased their subsidies to $250 and $510 respectively. The connection target was revised from 66,000 households to 40,000. The disbursement of subsidies was amended from the original two-tranche schedule to a one-time payment triggered by the verification of working connections with pre-paid meters. Another challenge was that slum residents in certain areas were reluctant to switch to legal connections due to issues of trust, payment barriers, and fear of reprisals from local cartels.

To address this issue, KPLC prepared an implementation acceleration plan, a two-track approach differentiating between those slums with rampant illegal connections and strong cartel presence, and informal settlements designated under the World Bank’s Kenya Informal Settlement Improvement Project. In the informal settlements, KPLC prepared for infrastructure improvements; in the slums where residents were reluctant to convert to legal connections, KPLC used a community supportive approach. Their outreach involved strengthening communication with residents through collaboration with youth groups, civil society organizations, and social scientists, and preparation of educational materials and contact points, such as kiosks.

It took more than three years for KPLC (and the World Bank) to act against the said slum cartels, despite the Bank’s own report from 2016 highlighting this as a “challenge” to project implementation.

I couldn’t easily find any World Bank project reviews in the intervening years. If anyone has pointers let me know.