This is from a story in The Guardian:

The ITDP bemoans Africa’s obsession with metros. Lagos in Nigeria – the largest city in the world without a functioning mass transit system – has been trying to build a metro since the 1980s. In the latest of many incarnations, the project was supposed to begin operations in 2012 at a cost of $2.4bn (£1.9bn). Six years after the supposed start date, construction is “nowhere near complete”, says Kost.

Abidjan, the economic capital of Ivory Coast, began construction of a metro last year. The French-financed and -built line is projected to carry 500,000 passengers a day at a cost of $1.7bn. Dar es Salaam’s bus system, by contrast, has capacity for 400,000 people and cost less than a 10th of that – about $150m.

Addis Ababa in Ethiopia opened a Chinese-built and -operated light rail line last year at a cost of $475m. Shenzhen Metro Group has a deal to run it for the first five years. 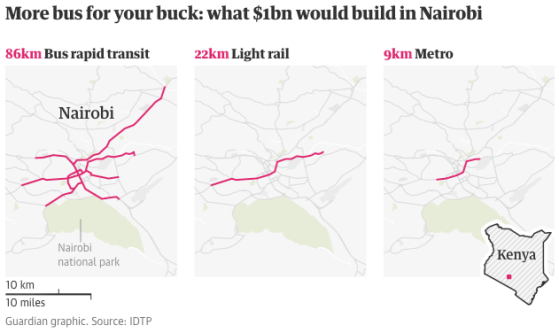 “With a metro, an international firm will often just parachute in its own system,” says Kost. “Bus rapid transit allows existing stakeholders to get involved. That’s what we did in Dar es Salaam and what we’re planning in Nairobi, where the bus bodies will be built in the city and local operators will look after tickets, fare collection and IT. It’s good for the development of the local economy.”

Regular readers know that I have a bias for Kost’s argument. Read the whole thing here. 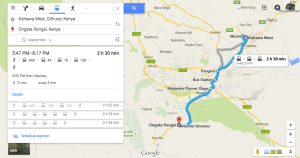 Launching the matatu routes in Google emphasizes the need to study the informal transit networks that shuttle masses of people around in sub-Saharan Africa, southeast Asia, and south Asia. “You’re saying this is part of the system,” said Klopp. And since the GTFS data structure and the Nairobi data are open source, Digital Matatus gives other groups in Mexico City, Manila, Dhaka, China, and elsewhere a plan to collect and disseminate data on their transit. The collaboration has already received requests from around the world to map their cities.

Digital Matatus has also started talks with four more cities in Africa—Kampala, Accra, Lusaka, and Maputo—to use the same methods to map their informal mass transit systems. “So many of our problems in developing cities where you have extreme poverty and awful environmental conditions—they’re always tied in some way to the transport sector,” said Cervero. “It’s very chaotic and unmanaged, so this is a huge first step towards enhancing those services.”

People in Nairobi still use the paper maps because the matatu routes have not changed since their release, and the ultimate goal is a formal transit system with set maps, times, and prices. But hopefully “formal” will still mean you enjoy your commute with twinkling disco balls and a good beat.

Wired has the rest of the story on how this happened here.

This is a cool development that will hopefully inform Nairobi County’s infrastructure planning going forward. It should not take 2.5 hours to travel across the city from Kahawa West to Rongai, a distance of only 24 miles.

The Kenyan Cabinet Secretary in charge of Transport recently announced a 22% decline in accidents on Kenyan roads in the first quarter of 2014 compared to the same period last year (resulting in 201 fewer deaths). Following the end of year holiday season uptick in road deaths (more people travel then; presumably more drink and drive as well) the government instituted strict traffic regulations, some of which have been struck down by the courts. But do these top-down rule changes work in reducing road accidents?

Probably not as well as we think, according to a new paper by Habyarimana and Jack:

This paper compares the relative impact of two road safety interventions in the Kenyan minibus or matatu sector: a top down set of regulatory requirements known as the Michuki Rules and a consumer empowerment intervention. We use very detailed insurance claims data on three classes of vehicles to implement a difference-in-difference estimation strategy to measure the impact of the Michuki Rules. Despite strong political leadership and dedicated resources, we find no statistically significant effect of the Michuki Rules on accident rates. In contrast, the consumer empowerment intervention that didn’t rely on third party enforcement has very large and significant effects on accident rates. Our intent-to-treat estimates suggest reductions in accident rates of at least 50%. Our analysis suggests that in institutionally weak environments, innovative consumer-driven solutions might provide an alternative solution to low quality service provision.

The Michuki Rules, which required retrofitting of vehicles with certain safety devices and other reforms as outlined in the net section, were widely believed to have led to an immediate and sustained improvement in the safety of Kenya’s roads. However despite this view, we find that most of the perceived effects were driven by short-run compliance costs imposed on vehicle owners and drivers, as opposed to their behavior, and that a month after the rules were introduced there was no discernible effect on insurance claims. In contrast, the consumer empowerment campaign we examine, which encouraged passengers to actively complain directly to their drivers when they felt unsafe, led to a remarkably large reduction in insurance claims of between a half and two-thirds.

Eng. Kamau and his team should take a look at this paper.

Also, the lesson here is not that we should not legislate against insanity on Kenya’s roads, just that those efforts should be complemented by a fire-alarm enforcement mechanism as opposed to using the Chai-Culture-crippled police patrol system.

John Michuki, MP for Kangema is dead at 80. The late Michuki was a Kenyan politician that many learned to love (and sometimes love and hate). As Transport Minister he brought sanity to the rowdy matatu sector with the much-loved “Michuki Rules”. As Minister for the environment he cleaned up Nairobi River.

His less illustrious contribution was in the security ministry. It is under his watch that the Standard Media group was raided by masked thugs under the pretext that they were about to publish information that would have “impinged on the person of the president.” It later emerged that the media house had information about alleged illegal dealings by a woman rumored to be an illegitimate daughter of president Kibaki. The war on the Mungiki sect was also carried out under his watch – with numerous allegations of extrajudicial killings of hundreds of young men.

The son of a paramount chief, Michuki was among the group of super-wealthy conservative elites who at independence took over power and managed to quiet the more radical elements of the independence movement. Under their watch Kenya emerged as a capitalist enclave even as its many neighbors flirted with communism and African Socialism, with disastrous consequences. For better or worse, Kenya benefited from this “home guard generation” (see Bates 1989, for instance; for a different view see AfriCommons).

The Kenyan political scene will sorely miss Mr. Michuki’s straight talk and ability to deliver. He was among a handful of government officials that actually stood for what they believed, and he had results to back up all his talk. As the Nation reports:

Michuki gained the reputation of being a “ruthless” and efficient manager, who is widely acknowledged as being among the best performing ministers in President Kibaki’s government.

May he rest in peace.

Informal businesses provide employment for millions of Kenyans. Kiosks (both big and of the mama mboga variety), the mitumba business, matatus and even peasant agriculture are what keeps the average Kenyan going. Because of governance issues – like corruption and poor laws – the formal sector of the Kenyan economy has consistently failed to provide enough jobs for the ever growing population. That said, I believe that the jua kali (informal) sector will not take Kenya where it wants to go. Economic History teaches us that scale has merits. It provides the resources for R&D, lowers operational costs and generates revenue for the government because it is hard to hide profits from the taxman like is commonplace in Kenya’s jua kali sector. Plus if we have scale we can export surplus production to places all over the Continent thus creating even more Kenyan jobs – why should we cede these markets to the Chinese, Indians and other “Dubai” traders?

That is why I think that Jaindi Kisero has a point with regard to Kenya’s matatu-dominated transport sector. It is time Nairobi, if not all major cities and towns, had decent public transportation unlike the chaotic and thuggish matatu industry. The matatu industry has given rise to a matatu culture that has taken vulgarity and criminality to a new level – the epitome of which is the dreaded Mungiki sect. Because of this, most reasonable people would concur that “formalizing” public transportation and the matatu industry would go a long way in reducing crime and bringing some sanity to Kenyan roads. Now if only there was a place where we could purchase political will and secretly feed it to Kenyan politicians.

And in other news, Somalis in the southern part of the country will be forced to go hungry after al-Shabab kicked out the WFP. About 900,000 people will be affected by the WFP decision. 2.8 million Somalis are dependent on food relief. The WFP decided to close shop in the face of several demands from al-Shabab (the demands were not all bad, I should add. One of them was that the WFP should not import food during the harvest season in order to promote local agriculture. These al-Shabab types know something about the demerits of food aid in Africa, it seems). Somalia has not had a functional government since the fall of Siad Barre in the early 1990s. Sometimes I wonder whether instead of the US paying the Ethiopians to invade Somalia it might have been better to have the Islamic Courts Union run the country. Well, at least for some time before incentivizing their being less predatory and misogynistic. Most politicians the world over have a price. Especially once they have tasted real power.

Lastly, Somalia is not all gloomy. If you are daring enough you can make money in the land of the al-Shabab, without being involved in piracy.