Research shows that the combination of urban sprawl and a lack of adequate public transportation is disastrous for low-income urbanites. Aware of this fact, the political leadership of Springfield resolved that they would do everything in their power to avoid becoming the next Atlanta. But to do so they have had to overcome challenges such poor demand (on account of a tiny car-loving population of just over 30,000), endemic corruption, and the lack of political will (The last time the town tried to build a subway system the contractor did a rather shoddy job, forcing the town to abandon the project altogether). 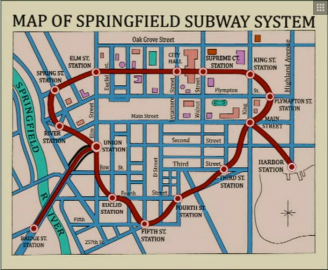 This is not the first transportation overhaul that the STA (Springfield Transit Authority) has implemented, although the last drastic change was way back in a 1993 episode with the introduction of a failed monorail system. Since then, it’s been pretty much all cars and skateboards on the city’s streets, and viewers learned that the single sad loop of a subway system in the city was actually abandoned. Poor transportation construction seems to be endemic to Springfield, as the tunnels, although functional, were apparently ruining the underground foundations of buildings. 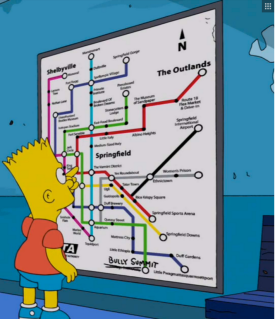 …….Bart probably won’t be putting his skateboard away any time soon, but it will be interesting to see how these fictional sites of comedy and intrigue return in the series. Will Springfield face a familiar future of urban disputes—perhaps sparked by the aesthetic retaliation from the residents of the Ugli district, or maybe the gentrification of Ethnictown?

However, there are still lingering questions about future commercial viability of the new expensive subway system, especially if the town fails to attract new residents. It doesn’t help that the town has a history of being hostile to immigrants. But given their apparent appreciation for evidence-based rigorous academic research in the process of public policy development, perhaps they could benefit from some of the fantastic work on immigration and migration coming out of the CGD.

In addition, it is unclear how the town financed the new subway system. As the Economist reports, banks have lately been wary of financing infrastructure investments. And with Yellen and co. scheduled to hit the brakes soon and a sooner-than-expected rates hike, Springfield’s public debt could become unsustainable.