This is from the IMF:

Export growth is not keeping up with rising levels of external debt:

….In 2017, the ratio was largely unchanged from the prior year, at an average of 138 percent. However, this ratio was close to double the average of 70 percent in 2010. Moreover, the average ratio masks wide disparity between countries. At the end of 2017 54 percent of countries in the region had an external debt-to-export ratio over 150 percent, as compared to 28 percent of countries in 2010 and the number of countries where the ratio surpassed 200 percent more than doubled, from 6 countries to 14 countries, over the same period. Most of these countries are ones that benefitted from HIPC and MDRI relief, including Burundi, Ethiopia, Niger, Senegal and Tanzania.

Bond issuance is dominated by a handful of countries:

Bond issuance by sovereign governments and pub- lic-sector entities in the region rose to $27 billion in 2017, a more than fourfold increase over 2016, driven to a large extent by a surge in issuance in South Africa to $19 billion from $4 billion in 2016, 70 percent of bond issuance in the region last year. An important factor was non-resident purchase of bonds issued in the South African domestic market. Bond issuance by other countries in the region totaled $8 billion, a tenfold increase from 2016, reflecting continued investors’ confidence and search for yield. Issuing countries in 2017 were Nigeria ($4.8 billion), Cote d’Ivoire ($2 billion), Senegal ($1.1 billion), and Gabon ($0.2 billion). Nigeria’s $3 billion Eurobond issuance marked the country’s largest such operation to date, and at end 2017, bond issuance accounted for one third of the country’s outstanding external debt.

Overall, while the data suggests that things may not be as bad as they were over the lost long decade (1980-1995), the trends are not encouraging. Total reserves as a share of external debt peaked around 2010 and have been in decline since. 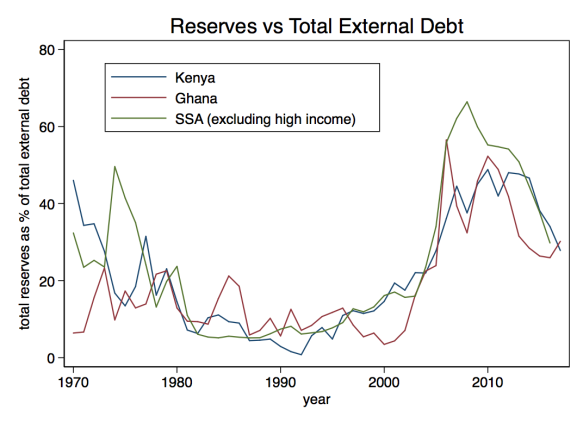 Mozambique was one of the biggest benefactors of debt forgiveness, with its debt slashed from 86% of gross domestic product in 2005 to 9% the next year. The country has built it back up since then to 61% of GDP.

Ghana’s debt was 82% of GDP in 2005 just before the international community forgave about half of it. It’s now up to 73% of GDP and growing, according to the IMF.

The burgeoning debt burdens are putting more pressure on African budgets. The cost of servicing Ghana’s debt will consume nearly 40% of government revenue this year, according to an analysis by Fitch Ratings — twice what is considered sustainable under the rule of thumb used by the IMF and many analysts.