This is the first of many installments on African presidents. I am currently researching the nature of presidential power in Africa.

First on the list is Yoweri Museveni of Uganda. Mr. Museveni has been in power since 1986 and has just won another 5-year term in office. The picture below is a screen shot from a recent tour of an area of Kampala to launch a cooperative society. 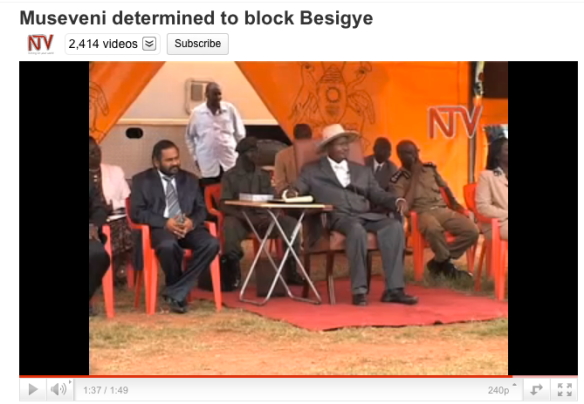 Notice the state and size of the presidential “red carpet.” Also, everyone but the president has to make do with plastic chairs. This picture, in many ways, is a metaphor for most African societies. In many countries only the “Big Man” gets to sit on the “carpet” while everyone else has to languish in the dust, including elites around the president.

This state of affairs creates perverse incentives that are inimical to economic growth. If I am an elite – even one who is close to the president – why should I invest in creating a carpet of my own if I know that the president will take it away? The result is poverty and material want that extends to the heart of power and elite-dom.

In a way EVEN the political elite in Uganda are poor. They may have some wealth stashed abroad but their realized standard of living within Uganda is not elite. If they get sick they have to fly to Kenya, South Africa [who’s elites have done slightly better at local accumulation] or further afield for treatment. Oftentimes even their 4X4 vehicles get stuck on the non-existent roads that they have refused to build and maintain. A mastery of the art of surviving [living day by day] is not restricted to the hoi polloi. Even the elite lack the requisite stability to escape the surviving mentality, even though they may not necessarily be surviving materially.

This is the reality for most of the Continent.

Next time, something on the false largesse of the likes of the late Omar Bongo Ondimba (the very short guy in the middle of the crowd in this video)