I just finished reading John Waterbury’s The Nile Basin: National Determinants of Collective Action. The book offers a concise introduction to the politics of international water basins as well as the various points of contention among the riparian states in the wider Nile Basin.

All upstream riparians in the Nile basin, including the Sudan share varying degrees of suspicion towards Egypt and Egyptian motives in seeking cooperative understandings. It seemingly follows that Ethiopia could mobilize these fears and occasional resentments into an alliance of upper basin riparians. The British in fact tried to do just that from 1959 to 1961, as Egypt and the Soviet Union jointly pursued the Aswan High Dam project at the expense of the upper basin (p. 86).

Why would upper basin riparians care about how Egypt uses water that flows up north? 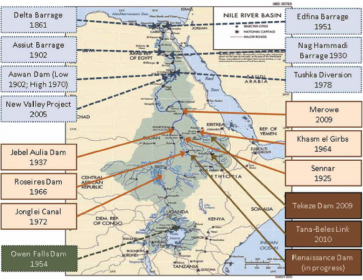 As Waterbury explains, this is because of the international norm of Master Principle of appropriation — “whoever uses the water first thereby establishes a claim or right to it” (p. 28). Therefore, Egypt has an incentive to use as much of the Nile waters as possible in order to establish a future right to high volumes of downstream flows. Increasing domestic water consumption makes it easy for Cairo to demonstrate “appreciable harm” if any of the upper riparian states were to divert significant volumes of the Nile’s flows.

This is principle is in direct conflict with the principle of equitable use that also underpins riparian regimes (which are legion, apparently. Read the book). And that is where inter-state power politics come in.

The ultimate nightmare for Egypt would be if Ethiopia and the Sudan overcame their domestic obstacles to development and to examine coolly their shared interests in joint development of their shared watershed in the Blue Nile, Atbara, and Sobat basins. Given Ethiopian and Sudanese regional behavior in the 1990s, Egypt need not lose sleep yet (p. 149).

Well, it is time for Egypt to lose sleep. Big time.

A resurgent Ethiopia is damming the Abbay (Blue Nile) and is likely to divert more of its waters in the future for agricultural projects.

What’s puzzling to me is why Egypt is not interested in cutting a deal right now. Given that Ethiopia is only likely to get economically and militarily stronger with time, why wouldn’t Cairo want to cut a deal under conditions of a favorable balance of power?

An obvious explanation is that Egyptian domestic political concerns make it harder for the government to sign a deal that diminishes claims to the Nile (Sisi doesn’t want to be the one that signed away water rights!) But this problem will only get worse for Egyptian elites, assuming that Egypt will get more democratic with time.

I am not surprised that Ethiopia is playing hardball.

1 thought on “Egypt vs Ethiopia: Hydropolitics of the Nile Basin”