This is from the FT:

China’s working-age population peaked in 2011 but its per capita income was just 20.7 per cent of the US level. Thailand was a little wealthier, at 28.9 per cent, when its working-age share peaked in 2013, but Vietnam was far poorer still, at 10.4 per cent of the US level, when it reached the same point a year later. Malaysia, Indonesia, India and the Philippines are projected to be somewhat better off when they reach peak working-age share, probably between 2020 and 2056, but still some way below the income levels reached in the west, as the third chart shows.

In February of this year, projections by Standard Chartered suggested that, by 2050, the likes of South Korea, Singapore, Thailand and China would have a higher share of pensioners in their population than most developed countries, depicted in the second chart [see below]. 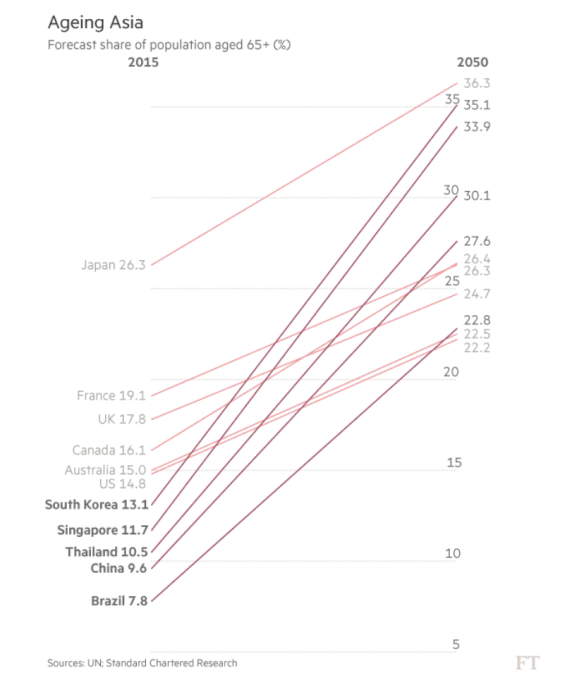 These are pretty sobering figures. Basically (East) Asia’s dependency ratios will quickly begin to look a lot more like what obtains in low-income as opposed to high and upper middle income states. And that means a stagnation or even decline in per capita income.

It will be interesting to see how these countries — most of which have historically been averse to immigration — will deal with this demographic challenge.

In addition to the obvious economic challenges, Asian countries will also have to figure out how to take care of the medical needs of an aging population that will likely be living longer.