In the 1990s Uganda was typically considered to be one of the success stories in the management of the AIDS epidemic in SSA. However, as is shown below, since the early 2000s Uganda has significantly lagged its regional peers (Kenya and Tanzania) in the fight against HIV/AIDS. New infections are declining in Kenya and Tanzania but increasing in Uganda. HIV prevalence also appears to be increasing in Uganda, while either declining or keeping steady in Tanzania and Kenya. Lastly, of the three countries, the rate of decline in AIDS-related deaths has been slowest in Uganda. 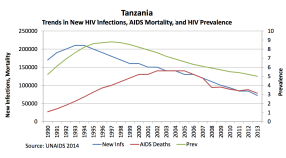 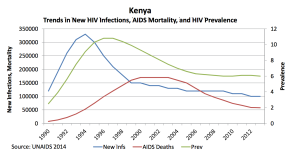 It’s not clear to me why the HIV/AIDS situation has deteriorated in Uganda since the late 1990s relative to its neighbors. After all, the three countries have been receiving cash from PEPFAR since 2004 (which explains the decline in AIDS related mortality in the mid-2000s after the use of ARTs became widespread).

My hunch is that this is a reflection of Yoweri Museveni’s gradual loss of control of the state institutions that he has worked hard to build since 1986. It is also probably related to the manner in which Museveni chose to deal with the advent of competitive politics in Uganda after the end of the no-party “movement” era. His strategy has come to be defined by a willingness to basically buy off anyone and everyone — at the expense of state institutions and specific government agencies.

The OIG concluded that the supply chain system does not effectively distribute and account for medicines financed by the Global Fund. There were reported cases of theft, including 40 cartons of artemisinin-based combination therapies; an unexplained difference of US$21.4 million between recorded and actual stocks at the central warehouse; and a difference of US$1.9 million between commodities received and actually dispensed to patients from January 2014 to June 2015 in eight high-volume facilities visited by the auditors.

Uganda’s post civil war economic recovery may have been impressive (see graph), but it should no longer be something for Museveni to hang his hat on. It is clear that the longer Museveni stays in office, the more he is going to undo his very own achievements in the earlier years of his three-decade rule.

5 thoughts on “The Continuing Deterioration of Uganda Under Museveni: The Case of HIV & AIDS”