….. Salgado was to take over his family’s sprawling cattle ranch in Minas Gerais—a region he remembered as a lush and lively rainforest. Unfortunately, the area had undergone a drastic transformation; only about 0.5% was covered in trees, and all of the wildlife had disappeared. “The land,” he tells The Guardian, “was as sick as I was.”

Then, his wife Lélia had an idea: they should replant the forest. In order to support this seemingly impossible cause, the couple set up the Instituto Terra, an “environmental organization dedicated to the sustainable development of the Valley of the River Doce,” in 1998. Over the next several years, the Salgados and the Instituto Terra team slowly but surely rebuilt the 1,754-acre forest, transforming it from a barren plot of land to a tropical paradise.

Now a Private Natural Heritage Reserve, hundreds of species of flora and fauna call the former cattle ranch home. In addition to 293 species of trees, the land now teems with 172 species of birds, 33 species of mammals, and 15 species of amphibians and reptiles—many of which are endangered. As expected, this rejuvenation has also had a huge impact on the ecosystem and climate. On top of reintroducing plants and animals to the area, the project has rejuvenated several once dried-up springs in the drought-prone area, and has even positively affected local temperatures. 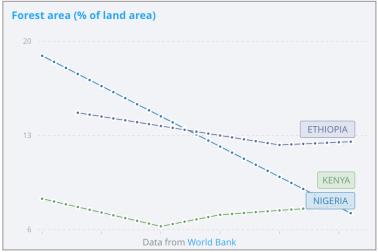 Here is the Guardian story.

Perhaps there is hope for countries like Nigeria (see graph) to eventually reverse the deforestation trends across the Continent over the last five decades.

Urbanization might help in the medium-to-long term, although its effects will be moderated by what happens to agricultural productivity. Climate change will matter, too. Finally, Kenya and Ethiopia provide suggestive evidence that the Continent’s ongoing population explosion might not decimate its forests after all. On Nigeria, it would be interesting to determine if the decline in forest cover is due to population growth or climate change effects in its central and northern regions.

1 thought on “How quickly can you regrow a forest?”