See earlier posts on this subject here and here. Below is a quote from FP on Uganda’s growing petroleum sector (see also the Global Witness report on Uganda’s secret oil contracts here): 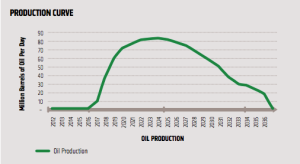 The bulk of Ugandan government borrowing against future oil revenues has focused on grand infrastructure schemes built and funded by the Chinese. In 2014 alone, the government signed deals with China to build two hydropower dams worth $2.2 billion, a standard gauge railway that could cost up to $8 billion, and a $600 million fertilizer plant. Additional projects include a $2 billion oil field being developed by the state-owned China National Offshore Oil Corporation and a $350 million roadbetween Uganda’s capital, Kampala, and Entebbe International Airport. The possibility has even been raised that a Chinese bank may bail out Ugandan parliamentarians in danger of going to jail for failure to honor their debts.

And how efficiently is Uganda spending the [expensive] borrowed money?

So what will happen when China decides to deal with its public debt situation and the effects propagate to its many public companies involved in mega-projects in Africa?

To reiterate, let’s not declare mission accomplished in the war against the resource in Africa just yet.