Update: Sarah Serem and the SRC appear to be backtracking and are now “open to dialogue” with MPs over their pay.

“False standards are set with salary scales for MPs, Ministers and top civil servants that the country cannot possibly afford in a time when examples not of extravagance but of austerity and sacrifice should be set. In 1963 MPs earned K£ 620 a year [in present terms about Ksh 89,704.34 a month].

This was increased to K£ 840 then to K£ 1200 a year [about Ksh 173,619.53 a month in present terms], making three increases and a doubling of salary in less than three years (And the K£ 100 a month is augmented by a daily sitting allowance, plus mileage and other allowances). Junior Ministers earn K£ 2260 a year. The President’s salary has been fixed at K£ 15,000 a year tax free and including other emoluments……. In six months an MP receives more money than the average peasant earns in half a life-time.”

That is Oginga Odinga writing in his autobiography Not Yet Uhuru.

As Kenyan MPs prepare to adopt a report this afternoon that will allegedly give the Parliamentary Service Commission legal cover to grant them a 59% pay rise, we should remember that this is not a new phenomenon. Top public officers in Kenya, and in particular MPs, have always been remunerated well relative to the country’s per capita income. 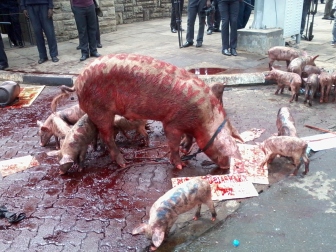 I must admit that as a researcher on legislatures in Africa, and Kenya and Zambia in particular, the issue of how to look at MPs’ salaries is not a straightforward one. On the one hand it is absolutely obscene that in a poor country like Kenya MPs make more than their counterparts in far much wealthier countries in Western Europe. But on the other hand I also realize the importance of shielding the House from the influence of money bags from State House. Poorer paid parliamentarians across the Continent (including in “shining star” Ghana) live and work at the mercy of the executive. It is no coincidence that Barkan and colleagues concluded in Legislative Power in Emerging African Democracies that Kenya has the strongest legislature in the region.

The ratio of the president’s pay to MPs’ is instructive. Back in the sixties, the president made 12.5 times what the MPs made. That ratio has since shrunk to less than 2.5.

As Oloo Aringo passionately argued in the late 1990s and early 2000s, the high pay of Kenyan MPs is partly responsible for the rise in legislative power in Kenya (Part of my work in the dissertation, among other things, will be to convince you that this is true – that relative pay of MPs matters. Stay tuned). In the present Kenyan case there is an argument to be made for the Salaries and Remuneration Commission (SRC) to review the salaries of all State Officers; and to bump MPs higher up the totem pole (by cutting the pay of other state officers) than where they are right now as far as their pay is concerned. Ms Serem’s first stop should be the independent constitutional commissions that continue to drain the exchequer with nothing to show for their work (OK, I’ll admit that some of the commissions are useful).

Kenyan MPs should definitely not get a pay hike. But the fight against greed in the august House should not be overdone, lest we end up with a weak parliament at the mercy of State House. This is the balancing act that I hope will inform the SRC commissioners’ actions as they try to tame our Honorable Members’ appetite.