This is from Yuhua Wang (highly recommended):

The collapse of the Chinese state in the early twentieth century was surprising. China was a pioneer in state administration: it established one of the world’s most centralized bureaucracies in 221 BCE, two hundred years before the Roman Empire. In the seventh century, it produced a quarter of the world’s GDP (Maddison 2007, 381) and became the first country to use a civil service examination to recruit bureaucrats…

Why, then, did China suffer a dramatic reversal of fortune, given its early bureaucratic development?

… elites’ level of support for state building depends on the geographic span of their social networks. If they must protect a geographically dispersed network, it is more efficient to support state-strengthening policies. These elites have an encompassing interest (Olson 1982, 48). If they need to protect a geographically concentrated network, it is more efficient to rely on private protection and oppose state strengthening. These elites have a narrow interest (Olson 1982, 48). 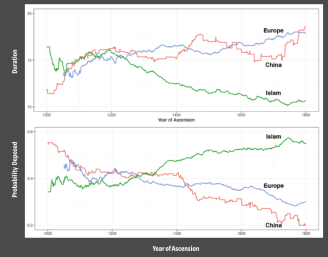 …. As the elites’ social networks became localized, they also fragmented; they found it difficult to organize cross regionally. A fragmented elite contributed to a despotic monarchy because it was easier for the ruler to divide and conquer. Historians have noted the shift to imperial despotism during the Song era, as the emperor’s position vis-à-vis his chief advisors was strengthened (Hartwell 1982, 404–405). The trend further deepened when in the late fourteenth century the founding emperor of the Ming Dynasty abolished the entire upper echelon of his central government and concentrated power securely in his own hands (Hucker 1998, 74–75). This explains the increasing security of Chinese rulers [see image].

The despotic monarchy and the narrow interest elite became a self-enforcing equilibrium: the rulers were secure, while the elite used the state to protect their local interests and enjoyed their autonomy. Yet this arrangement led to the gradual decline of the Chinese state.

There are so many parallels to the challenges to state-building in Africa throughout the piece (many of which were documented by Catherine Boone in the excellent Political Topographies of the African State).