Here are some interesting figures from the Center for Strategic & International Studies. Between 2010 and 2017 trade between African states and China rose from $91.2b to $165.4b. For the U.S. total trade volume contracted from $80.3b to $36.7b (admittedly some of this driven by declining oil prices). All major Western countries saw a decline in their trade volume with the Continent. 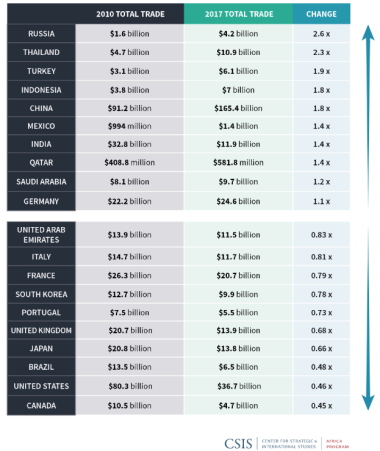 Germany is the only major Western country that saw its trade volume with African states increase over the same period.

These figures also underscore the recent narrowing of the Red Sea – with Gulf states pushing for ever closer ties with African governments. A lot of focus has been on the geopolitical aspects of this shift (with Qatar and Turkey jostling for influence vs Saudi Arabia and other Gulf states). But as the trade data suggest, trade is also an important feature of the evolving Afro-Arabia relations.

Overall, it is likely that African states’ economic policies and regulations, as well as votes at the UN, will shift to reflect the changes in the strength of the Continent’s trade links.

Japan is trying to stem the decline of its economic influence on Continent with a new joint insurance product with African Trade Insurance Agency and a Saudi bank. The U.S. is about to launch the U.S. International Development Finance Corporation.