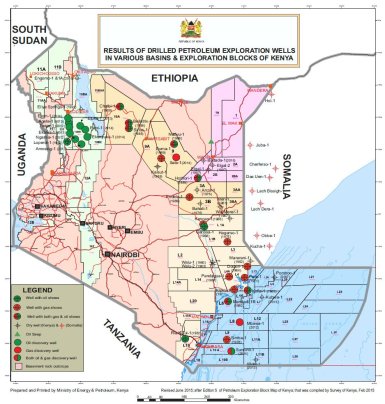 On Saturday the Kenyan foreign ministry recalled the Kenyan ambassador in Mogadishu and asked his Somalia counterpart to leave the country. This followed an alleged London auction of oil blocks in a disputed maritime zone by the Somalia government.

A Kenyan official characterized the auction as an “unparalleled affront and illegal grab at the resources of Kenya” that would “not go unanswered”.

The government of Somalia has since disputed the charge, and in a well reasoned letter asked the Kenyan government to reconsider its actions. Earlier, a Kenyan foreign ministry official had sought to de-escalate the situation by clarifying that the two ambassadors were merely asked to touch base with their respective governments in order to facilitate consultations.

Kenya and Somalia hold rival claims on a triangular maritime territory in the Somali Sea (see image). The matter is currently under consideration by the International Court of Justice (ICJ).

It is worth noting that Kenya and Somalia have not had the best of historical relations. In the 1960s Mogadishu supported an irredentist movement in northeastern Kenya. The rivalry cooled down during Somalia’s years of civil war. During the same period Kenya stumbled upon a policy of supporting any and all efforts to keep the conflict and instability on the Somalia side of the shared border. The latest expression of the policy has been to support the state of Jubaland, a matter that goes against the interests of Mogadishu. Jubaland State President Sheikh ‘Madobe’ Ahmed visited Kenya in December 2018, likely on a mission to strengthen intra-clan alliances and support from Nairobi. Kenya is a troop contributing country (TCC) under AMISOM, and for a variety of reasons remains to be a weak link in the fight against Al-Shabaab, the terror group.

The dust up between Kenya and Somalia reflects larger geopolitical contests for influence in Mogadishu. It is reasonable to assume that the dispute over the oil exploration blocks will not be restricted to the two countries. In addition to interested Western private energy firms (and their home governments), Mogadishu is likely to get support from its friends in the Gulf and Turkey. Meanwhile, Kenya’s primary leverage will be its important role in AMISOM. A fallout with Nairobi would likely cause serious problems for Mogadishu, and pose a serious challenge to Somalia’s territorial integrity — Jubaland may find support to sue for independence from Mogadishu.

For now, both Kenya and Somalia have expressed public commitments to respect ICJ’s ruling regardless of the outcome. This is encouraging. Existing research suggests that states are less likely to escalate tensions if they commit to legal means of settling territorial disputes.. Indeed, Nigeria and Cameroon provide a good example of two countries that managed to settle a border dispute in a potentially oil-rich area amicably.

All to say that I don’t think Kenya is going to war with Somalia any time soon.

1 thought on “Is Kenya prepared to go to war with Somalia over a disputed maritime territory?”