This is from The Economist:

WHICH has provided a better return in recent decades: America’s stockmarket or education? The latter, according to a research review by George Psacharopoulos and Harry Patrinos for the World Bank. The two economists looked at 1,120 studies, across 139 countries, and came up with an annual average “rate of return”—actually a pay premium, the increase in hourly earnings from an extra year of schooling—of 8.8%. The analogy is inexact, but for comparison America’s stockmarket returned an annual 5.6% over the past 50 years.

Their figure excludes social gains, such as lower mortality rates associated with greater education. The premium is higher for girls and for primary education. It is also higher in poor countries, presumably because the smaller the share of educated people, the higher the pay they can command. The same reasoning suggests that the return should have dwindled as educational attainment rose. Instead, it has stayed strong, especially for higher education. 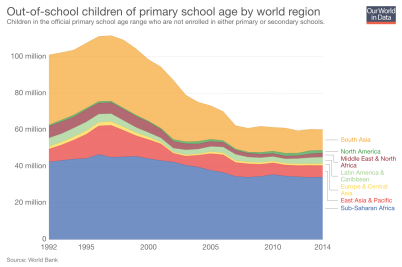 Education attainment appears to be trending in the right direction across the globe (see image). However, the rate of improvement over the last three decades has been higher in some regions than in others. For example, while in 1992 Africa and South Asia had 42% and 38% of the out-of-school children of primary age, respectively, by 2014 the comparable figures were 57% and 19%. Clearly, African states need to do more.

The Bill & Melinda Gates Foundation has recently announced its foray into education. If done well, the Foundation’s involvement in the education secctor has the potential to nudge policy makers in the right direction, while also generating valuable data for cross-country comparisons.