President Jacob Zuma continues to be in conflict with his own Finance Minister, Pravin Gordham, over fiscal policy (and propriety in the management of public finances). The markets trust the latter. The former has more power, including the coercive apparatus of South Africa’s administrative state. Having just presided over a disastrous outing for the ruling ANC in this month’s municipal elections, Zuma needs to create more policy wiggle room for his floundering administration. And Gordham’s commitment to fiscal discipline stands in the way. So far the markets’ reaction to Zuma’s machinations at the Finance Ministry have managed to discipline intra-ANC elite politics. But as Zuma gets closer to retirement (or being forced out) it is unclear how much he is willing to continue humoring the markets…

The revelation on Tuesday that Gordham may be forced out via (likely dubious) charges of improper conduct while he served as head of the South African Revenue Service sent the rand tumbling, again.

This is the third time the police unit, known as the Hawks, have questioned Gordhan. Earlier this year, just days before he was set to deliver a crucial budget speech, the Hawks demanded Gordhan answer written questions. Then in May, rumors of Gordhan’s imminent arrest sent the currency tumbling, just as ratings agencies were assessing South Africa. Gordhan was not arrested then, and went on lead South Africa’s recent economic recovery, assuring international investors of the country’s stability. 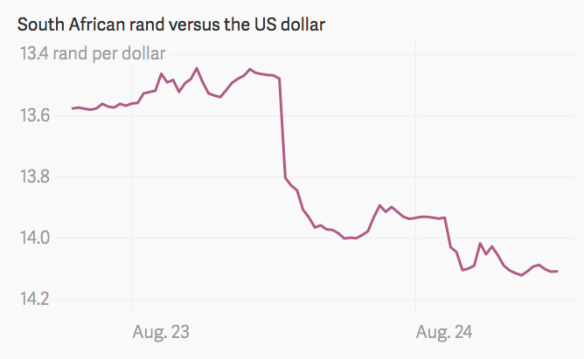 Analysts believe Gordhan is the target of president Jacob Zuma and his political allies. The two are reported to be at loggerheads over the management of South Africa’s state-owned enterprises, especially the national carrier South African Airways. Gordhan’s office has delayed bailing out the embattled carrier until a new board is appointed (effectively removing those close to Zuma, according to reports). Gordhan’s office has also curbed spending on plans to build a new nuclear power plant.

Earlier this week, a cabinet briefing announced that Zuma himself would now directly oversee state-owned companies. Analysts say the move allows Zuma to maintain political power and protect his interests after historic losses in this month’s local government elections. Zuma’s office has denied that there is a rift between the president and the finance minister. According to reports, Gordhan is determined to resist pressure to resign

For more on this visit Quartz Africa: