South Asia still posts the lowest average height for adults in the world (see image below). But a remarkable finding of a recent study is that adult Africans (among other low income regions of the world) have gotten shorter, on average, since the 1970s.

Being taller is associated with enhanced longevity, and higher education and earnings. We reanalysed 1472 population-based studies, with measurement of height on more than 18.6 million participants to estimate mean height for people born between 1896 and 1996 in 200 countries. The largest gain in adult height over the past century has occurred in South Korean women and Iranian men, who became 20.2 cm (95% credible interval 17.5–22.7) and 16.5 cm (13.3–19.7) taller, respectively. In contrast, there was little change in adult height in some sub-Saharan African countries and in South Asia over the century of analysis. The tallest people over these 100 years are men born in the Netherlands in the last quarter of 20th century, whose average heights surpassed 182.5 cm, and the shortest were women born in Guatemala in 1896 (140.3 cm; 135.8–144.8). The height differential between the tallest and shortest populations was 19-20 cm a century ago, and has remained the same for women and increased for men a century later despite substantial changes in the ranking of countries. 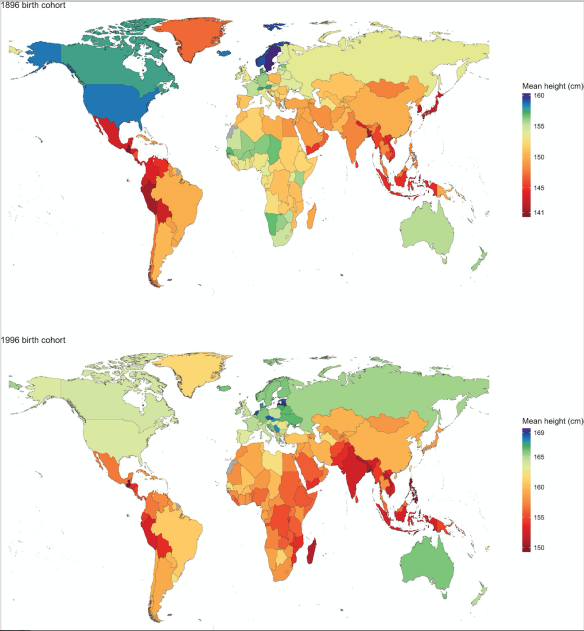 What explains deceleration in average adult heights on the Continent?

One obvious explanation is a decline in nutrition amid rising populations and declining agricultural productivity (Africa barely registered a green revolution). Another major culprit is the economic disaster that visited the Continent from the late 1970s to the early 1990s — which resulted in poor nutrition and an unchecked disease burden. Lastly, there is the issue of water and sanitation, especially in the context of a rapidly urbanizing population, which has direct implications for the realized disease burden.

2 thoughts on “Why are Africans getting shorter?”