This paper contributes to the growing literature on anti-corruption accountability by comparing individual decision making under different norms and institutions. Employing an experimental methodology, I examine how the propensity to report corruption differs between Northern and Southern Italians, two groups that experience very different levels of corruption in everyday life. Further, the experiment measures behavior under two different institutional environments: a “strict enforcement” condition where reports always result in sanctions against perpetrators, and a “lax enforcement” condition where 50% of reports are ignored. I find no difference in the behavior of Northern and Southern Italians in the lax enforcement condition, but in the strict enforcement condition, Southerners are much more likely to denounce wrongdoing, while the behavior of Northerners remains unchanged. These results demonstrate that exposure to corruption may strengthen accountability norms, but only in the presence of high quality enforcement institutions.

That’s Nan Zhang in a fascinating paper on corruption in Italy.

As recent cases in the New York state legislature, Illinois, and the expense scandals in the UK Parliament demonstrate, the difference between OECD states and the developing world when it comes to corruption is simply about enforcement. It’s not, strictly speaking, because of a fundamental difference between OECD and non-OECD states in the pro-social tendencies of politicians. There are no good politicians or public officials, just properly incentivized ones. Most OECD states have managed to reduce corruption by having a credible deterrent in the form of functional judicial systems. Corrupt people go to jail. 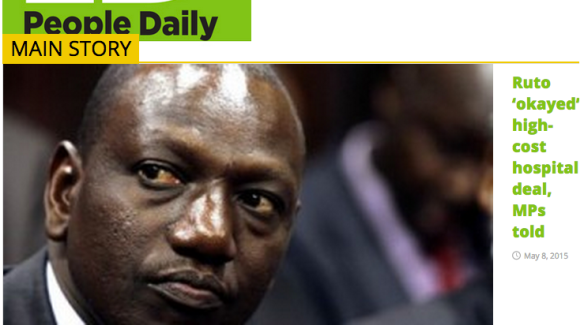 For instance, over the last 15 years Kenya has seen a surge in the reporting of corruption scandals but to little effect. The most recent scandal to break is one involving the deputy president (pictured above), who allegedly inflated a hospital construction project by Kshs 11b (US $115m!!!) Since no one gets punished, the fear of getting exposed has little deterrence value. It is common knowledge that “everyone” is corrupt and gets away with it. In such an environment, you are a sucker if you are clean.

The obvious lesson here is that it is not enough to set up anti-corruption commissions. What reduces corruption is the credible threat that the corrupt will be punished.