Rob thy neighbor appears to be the decision rule for robbers, at least in Chicago. Bernasco, Block and Ruiter, writing in the January 2013 issue of the Journal of Economic Geography, present research on robbers’ choice of crime sites:

“This article analyzes how street robbers decide on where to attack their victims. Using data on nearly 13,000 robberies, on the approximately 18,000 offenders involved in these robberies, and on the nearly 25,000 census blocks in the city of Chicago, we utilize the discrete choice framework to assess which criteria motivate the location decisions of street robbers. We demonstrate that they attack near their own homes, on easily accessible blocks, where legal and illegal cash economies are present, and that these effects spill over to adjacent blocks.”

The graph below (on p. 129 in the paper) illustrates robbers’ tendency to carry out their activities closest to where they live (for reasons why see the paper). 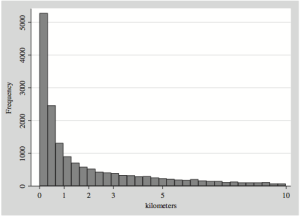 The findings are at once obvious and insightful. The insightful bit is that because of the geographic concentration of crimes and criminals, sometimes it might make more sense from the point of view of authorities to just focus on containing criminal activity within specific neighborhoods, leading to further entrenchment of a culture of crime in those neighborhoods.

If you notice,  in most places – including Nairobi – certain types of crime only get reported when they cross these implicit barriers. Otherwise, crime in bad neighborhoods becomes a case of if a tree falls in the forest.