“The survey for the proposed new capital of South Sudan, Ramciel, is expected to be completed within the next six months, reports the official in charge of the project.

resolved to suspend any construction of new public buildings for the national government in Juba.

Juba was disqualified for a number of reasons including administrative stalemate over which level of government its jurisdiction should fall under.”

That is the official reason.

I know very little about the deliberations that resulted in the move but another reason could be that Juba was too far from the new nation’s centre of (ethno) political gravity (see maps; click on image to enlarge). Relocations of capitals almost invariably have political considerations. One only hopes that the Bari community whose ancestral homeland is around Juba will not suddenly find themselves completely abandoned by the central government.

The government should ensure that Ramciel does not suddenly suck in all the money. It could prove beneficial to decouple the political and economic capitals of the country. 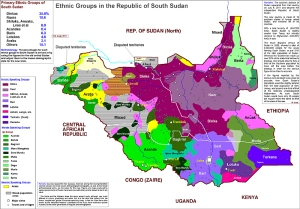 On the plus side this is a sign that the new government in Juba is willing to try out new things. A fresh start in Ramciel might not be such a bad idea.

4 thoughts on “South Sudan to relocate capital to Ramciel”