The Ivorian electoral commission declared Alassane Ouattara, the northern candidate, as the winner of the presidential runoff held on Sunday. Ouattara got 54.1% of the vote. Incumbent Laurent Gbagbo disputed the results and had the country’s constitutional court reject the pronouncement. His supporters contend that there were significant irregularities in three regions in the north of the country. 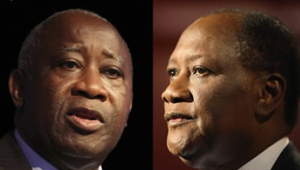 UN and other mission observers declared that the election globally reflected the will of the people of Cote d’Ivoire. The BBC reports that the country’s military has sealed the borders amid rising tension and confusion over the political stalemate in the country. Mr. Gbagbo has been president since 2000.

For the sake of institutionalism the international community should not allow Mr. Gbagbo to remain in power. His 10-year tenure has not done much in terms of healing relations between the two halves of the country that fought the 2002-04 civil war. The fact that even his incumbency advantage could not help him beat Ouattara signals his general incompetence and the mass’s disaffection with his rule.

Cote d’Ivoire has a population of 21 million people, 49% of whom live in urban areas. Life expectancy in the country is a dismal 56 years. Only 48% of Ivorians  age 15 and over are literate. Ivorians’ per capita income is US $1700 and 68% of them depend on agriculture for livelihood. 42% of Ivorians live below the international poverty line of $2 a day.