In 2013 a number of pundits declared that the Kenyan election was effectively decided on the day the IEBC ended its mass voter registration exercise (It was not, turnout won the election for Kenyatta). As a result, Kenyatta’s campaign team came up with the narrative that victory was inevitable on account of the “tyranny of numbers”. This year Odinga’s campaign has adopted a similar tactic with its claim of heading of movement of “ten million” voters. The total number of registered voters in Kenya is just over 19m.

The idea that the elections can be won at the close of registration brings to mind the neutrality of the IEBC when deciding how to allocate finite resources for mass voter registration. To assess this I looked at the distribution of biometric voter registration (BVR) kits relative to a number of factors, including Kenyatta’s vote share in 2013, county area, county population, population per electoral units (wards and constituencies), and the number of electoral units.

Here are the summaries:

1.  Being an incumbent, it is conceivable that Kenyatta would have wanted to influence the allocation of BVR kits. But there is no obvious relationship between Kenyatta’s county-level vote share in 2013 and the distribution of BVR kits ahead of the 2017 election. The pro-Kenyatta counties of Nakuru, Kiambu and Meru that received a lot of kits also have large populations. If anything, it appears that pro-Odinga counties got more kits, perhaps a reflection of the fact they had relatively more unregistered potential voters after 2013. 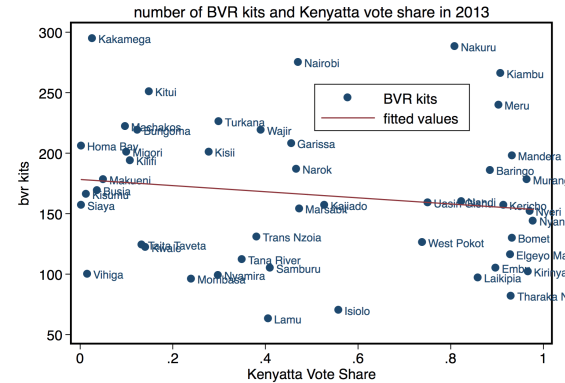 2. The number electoral units (wards or constituencies) had no influence on the rate of voter registration in the 47 counties. In other words, it is not the case that counties which had a lot more electoral units (and therefore potential candidates) experienced greater rates of voter mobilization for registration. 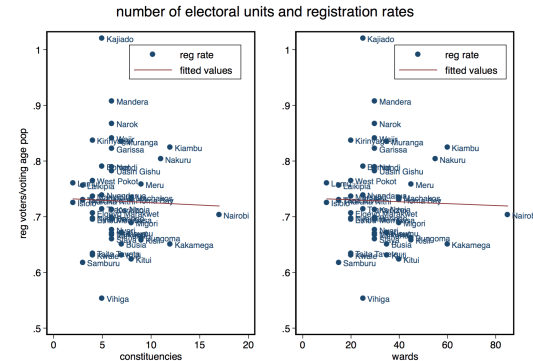 3. However, the population per electoral unit (wards and constituencies) was negatively correlated with the registration rate. In other words, more populous wards and constituencies experienced lower registration rates relative to their less populous counterparts. This makes sense, to the extent that the IEBC was targeting a specific number of BVR kits per electoral unit per county. 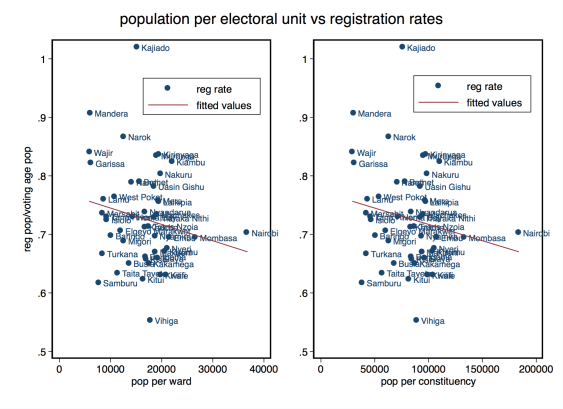 4. Bigger counties with relatively smaller populations benefited from the fact that land area was a consideration in IEBC’s allocation of BVR kits. 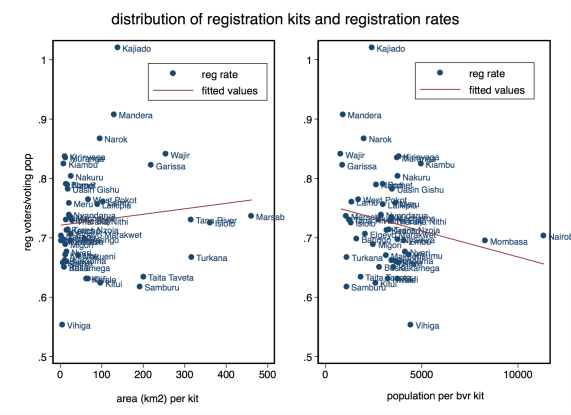 Kajiado registered more than 100% of its projected adult population (based on the 2009 census). This may be a case of massive in-migration after the 2009 census or the deliberate importation of voters for the specific purpose of influencing the outcome of intra-county elections.

Vihiga, on the other hand, stands out for its poor registration rate. It is noteworthy that Vihiga is home to Musalia Mudavadi who came third in 2013 and is now part of the NASA coalition led by Raila Odinga. Given that the mass registration exercise ended well before it was clear that Mudavadi was not running for president, the low registration rates in Vihiga raise questions about his ability to turnout the vote come August 8th.

Finally, while it is hard to discern what happened within counties — the effort of IEBC agents is unobservable — it is fair to say that political considerations do not appear to have influenced the number of BVR kits deployed to the counties for the mass voter registration exercise.